This product is available in: CA, DC, IL, MN, NY Unfortunately, we can't ship to PO Boxes and APO addresses.

Size750mL Proof98.6 (49.3% ABV)
Aged for up to 16 years, this limited edition whiskey was finished in port barrels and French oak casks.
Notify me when this product is back in stock.

This product is available in: CA, DC, IL, MN, NY Unfortunately, we can't ship to PO Boxes and APO addresses. 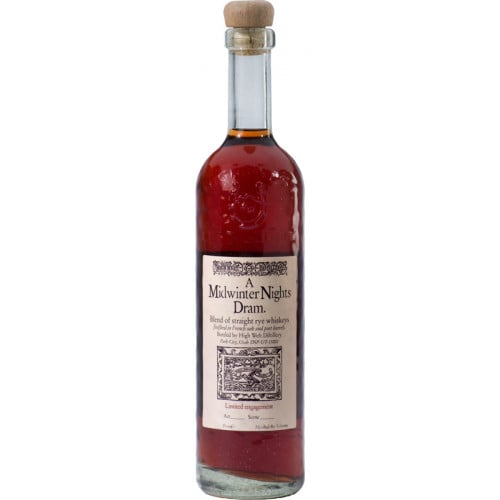 Situated at the bottom of the Quitting Time Ski Run in Park City, High West Distillery & Saloon is the first distillery in Utah since Prohibition and the only ski-in gastro-distillery in the world. "We wanted to call High West a "saloon", says David Perkins, High West's founder, "because we wanted to pay homage to the history of saloons in the old West and the important role they played in each and every town that had one. The saloon was the main meeting place where town hall was held, important announcements were made, and people went to eat and drink. We want people to share that sense of community and friendship over High West."

High West A Midwinter Nights Dram is a limited edition rye whiskey just released by High West Distillery. The whiskey is made from a marriage of six year-old rye whiskey (made from 95% rye and 5% malted barley) and sixteen year old-rye whiskey (made from a mash of 80% rye, 10% corn, 10% barley malt). After the rye whiskies were married together, they were finished in French oak barrels and barrels that were previously used to mature port. "The rye forms a beautiful vanilla, caramel and cinnamon base, the port barrels add plums and dried fruits, and the French Oak adds a spice accent," says Perkins. "It tastes like a proper Christmas plum pudding with lovely mulling spices, dried fruits and crème Anglaise. We knew this was just perfect in the middle of a long cold winter."

High West A Midwinter Nights Dram is a limited edition whiskey, and we have only a handful of bottles available.

Bold aroma of cherries, with undertones of vanilla, caramel and cinnamon. Notes of Christmas plum pudding, dried fruits and mulling spices on the palate. Long and fruity finish, with notes of cherries and cr