Size750mL Proof90 (45% ABV)
Rebel Straight Rye Whiskey is a small batch rye, available in limited quantities. Winner of Platinum Medal at the 2018 SIP Awards and Double Gold at the 2016 San Francisco World Spirits Competition.
Notify me when this product is back in stock. 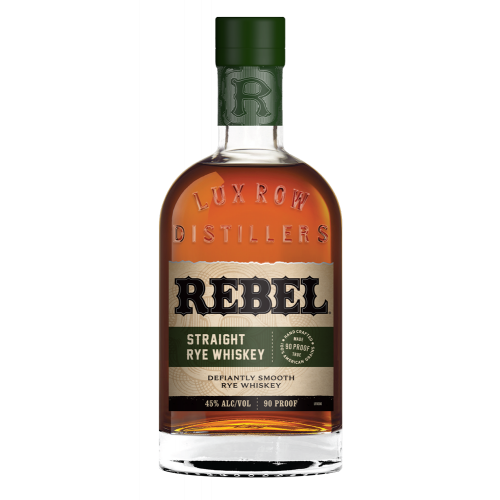 While Rebel Bourbon might have risen to fame by replacing rye with wheat, they still recognize the qualities that rye has to offer. With a mash bill consisting of rye grain, corn and malt, their Straight Rye Whiskey is described as a "defiantly smooth whiskey". This is a small batch rye that is produced and sold in limited quantities. Bottled at 90 proof, this smooth, spicy rye has a mildly woody palate where spicy rye is balanced by sweet vanilla notes.

Rebel Straight Rye Whiskey was awarded with a Platinum Medal at the 2018 SIP Awards and with Double Gold at the 2016 San Francisco World Spirits Competition.

The nose is spicy and warm with hints of chocolate and vanilla. The palate offers rich and spicy rye flavor that’s balanced by sweet vanilla notes. The finish is warm and spicy.