Size1000mL Proof70 (35% ABV)
This breakfast whiskey is an aged four-grain mash bourbon combined with 100% pure New York State maple syrup from Mendon Maple Farms.
Notify me when this product is back in stock. 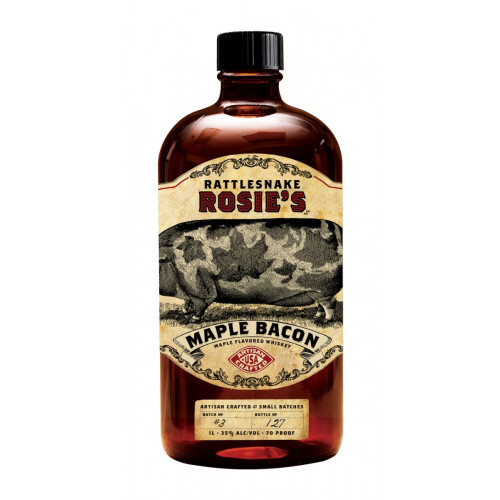 Tommy Brunett is a man of many talents — his band, The Tommy Brunett Band, tours frequently in the Upstate New York area and has gained national recognition for both original songs as well as classic covers of Johnny Cash and Billy Joe Shaver. A few years ago, while on tour, Brunett had an epiphany: “What goes together better than whiskey and rock?” Being the consummate marketer that he is, Brunett teamed up with Master Distiller Drew Wescott to form Iron Smoke Distillery, which distills whiskey from fresh, local ingredients sourced directly from farms in the Finger Lakes region.

Iron Smoke is a partnership between rocker Tommy Brunett and distiller Drew Wescott, based in Fairport, New York. This breakfast whiskey is an aged four-grain mash bourbon combined with 100% pure New York State maple syrup from Mendon Maple Farms along with bacon flavor. Adorning the label is a hand-drawn pig with maple leaves decorating her body, Iron Smoke staff has affectionately named her Lulu.

Pancakes and bacon on the nose and palate, the finish is medium length, sweet, and a dash salty.

3.9 out of 5
(4 reviews)
Write a review
Real email address is required to social networks
Sign in
Login with Google
Login with Facebook
Or
We also recommend