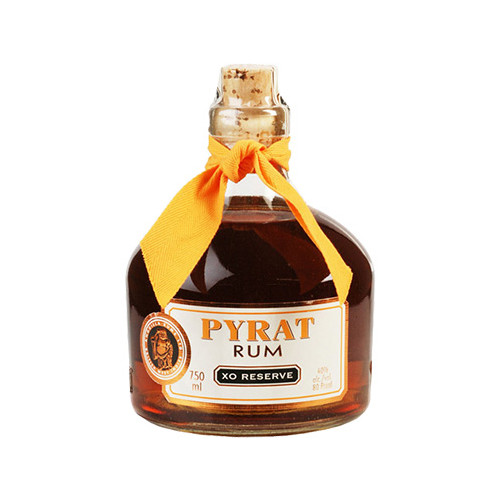 Pyrat Rum is a brand owned by owned by Patrón Spirits, and was released in 1997. The company is not a distiller, but rather a blender of spirits. Pyrat Rum was previously produced by the Anguilla Rums Company, but is now produced and bottled in Guyana South America, in the Diamond Bottling Plant owned by Demerara Distillers Ltd. (DDL). Pyrat XO Reserve, is a blend of 9 different Rums, sourced from all over the Carribean, primarily consisting of 2-year-old Demerara rum.

Demerara rum is produced by DDL, which produces well over 20 million liters of rum a year. Though they have their own label, El Dorado, their rum is also commonly used in blends like Pyrat XO Reserve. The Diamond Bottling Plant -which is owned by DDL- has its own private bottling line within the plant itself.

The rum in Pyrat XO Reserve is partly produced in a traditional pot still, and a portion of the blend is produced using Demerara Distillers’ High Ester Still, which is a John Dore Still. The oldest rum in the Pyrat Rum XO blend is 15-years-old, and all of the XO rum is aged in a combination of American Oak and French Limousine oak casks.

Bottled at 40%, ABV Pyrat XO has a stout corked bottle said to resemble the type of bottles used by Caribbean rum runners, ship captains, and pirates in the 19th century. This XO Reserve has a dark amber color. It is sweet on the nose with notes of molasses, toffee, citrus, and spice. The palate is sugary, with signature bright citrus notes of orange liqueur and lemon, and tobacco. The deep flavors of Demerara rum are also present. It has a long finish with hints of ginger and cinnamon.

Pick up a bottle of Pyrat XO Reserve today!

This XO Reserve has a dark amber color. It is sweet on the nose with notes of molasses, toffee, citrus, and spice. The palate is sugary with signature bright citrus notes of orange liqueur and lemon, and tobacco. The deep flavors of Demerara rum are also present. It has a long finish, with hints of ginger and cinnamon.