Size750mL Proof90 (45% ABV)
Aged for 4 years in rye casks, this rum stands out from the intriguing lineup of Don Papa Filipino rum. Fragrant, balanced, and intense, the 90-proof rum is fruity, spicy, and extra-smooth.
Notify me when this product is back in stock. 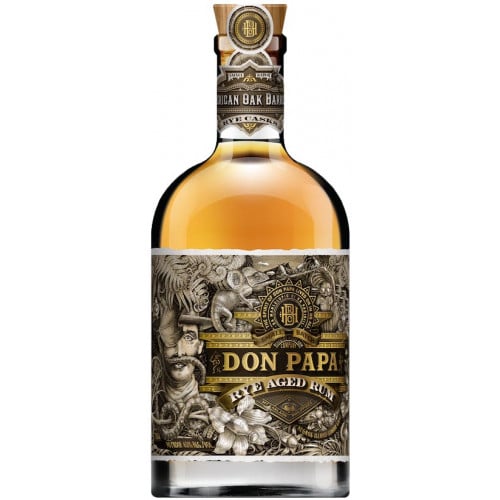 Don Papa Rum was founded in 2011 by Stephen Carroll, a former Remy Cointreau executive. After visiting the sugar capital of Negros, while visiting the Philippines, Carroll became enchanted by the island and its "stories of an island that had everything; from the world’s finest sugarcane, beautiful beaches, mountains, and volcanoes… even guerillas in the hills!" He became determined to switch up the Philippines’ less than stellar rum reputation with a new imaginative, premium offering. The Philippines is ranked number three on the list of largest rum markets in the world, making it even more of a prime fit for the former Remy exec.

The brand is indubitably inspired by the Philippines. The name Don Papa is a nod to Dionisio Magbuelas, popularly known as Papa Isio, a healer, shaman, seer, rebel, and leader of the babaylan or shamans, who played a key part during the years prior to the onset of the Philippine Revolution in the 19th century. Don Papa is inspired by the essence of the leader that Magbuelas was; "A real and charismatic leader from the island of Negros, Philippines, whose legend was instrumental to the independence of the island during the Revolution of the 1890s". The rum is distilled in the fertile foothills of Mt. Kanlaon, an area where some of the finest sugarcane is milled, producing rich, sweet molasses.

The blending of Don Papa is sheer alchemy, done in collaboration with a master blender from Ginebra San Miguel. The Don Papa Rye Cask expression has spent 4 years in rye casks, resulting in an expertly-balanced and aromatic 90-proof rum that is unique and intense with spicy notes and silky smoothness. A truly standout expression in their impressive lineup.

The nose of this amber-colored rum opens with fruit and a touch of rye spice. It's rich and dry on the palate with a velvety smoothness that lasts through the long finish with a distinct delicate brightness.