Learn more
Size400mL Proof92 (46% ABV) each *Please note that the ABV of this bottle may vary
This feature of four single malt whiskies represents exquisite expressions of Scotland's different whisky regions, and is a great way to sample Scotland's unique culture and terrior
Notify me when this product is back in stock. 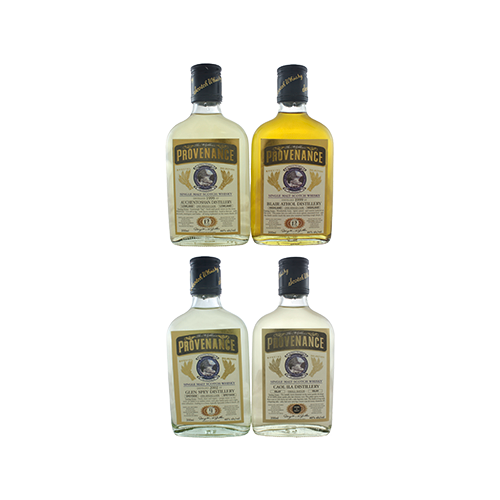 Situated at the foot of the Kilpatrick Hills in Western Scotland, Auchentoshan (pronounced Aw-khen-tosh-an) Distillery was founded in 1800 and is one of the last remaining Lowland malt whisky distilleries. The distillery is nicknamed "Glasgow's Malt Whisky"due to its proximity to Glasgow, and its whisky is nicknamed "breakfast whisky"due to its sweet flavor and elegant texture.

Auchentoshan Single Malt Scotch Whisky is made from malted, optic barley that is gently kilned and completely unpeated. The barley is milled and mashed before being fermented in wooden washbacks made from Oregon pine. While more expensive to maintain as compared to stainless steel washbacks, wooden washbacks retain a portion of the heat produced during fermentation, and ultimately produce a lighter and slightly sweeter whisky. Following fermentation, the single malt whisky is distilled three times through Auchentoshan's copper-pot stills.

Provenance Special Selection Auchentoshan Single Malt Scotch Whisky was distilled in 1999 and aged for twelve years in a used bourbon cask. It has a robust, chewy mouthfeel, with notes of almonds, nutty dough and malt that lead to a warm finish.

Founded in 1798 by John Stewart and Robert Robertson, Blair Athol Distillery is situated in the Highlands region of Scotland and is one of the oldest operating distilleries in the world today. The whisky produced at Blair Athol, which is made using malted barley sourced from Roseisle and water from the Ben Vrackie Mountain, is an essential component in Bell's Blended Scotch Whisky. As a result, Blair Athol Single Malt bottlings are incredibly rare.

Provenance Special Selection Blair Athol Single Malt Scotch Whisky was distilled in 1999 and aged for over twelve years in a used bourbon cask. It has a light and fruity nose, with notes of spicy fruit, vanilla and honey. The finish is soft and warming, with touches of mint and pepper.

Nestled in a hidden cove near Port Askaig on the island of Islay, Caol Ila Distillery (pronounced "Cull Eela,") was founded in 1846 by Hector Henderson. It borrows its name (which means "The Sound of Islay"in ancient Gaelic) from the sea sweeping past its dramatic and almost hidden location — it is situated between a steep cliff and the eastern shores of the Sound of Islay. For over a century, small coal-fired boats known as puffers navigated the Sound and brought barley, coal and casks to the distillery.

Provenance Special Selection Caol Ila Single Malt Whisky Scotch Whisky is distilled from locally malted barley, together with pure spring water sourced from Loch Nam Ban (the water travels through limestone and peat before reaching the distillery). Bottled in the winter of 2012, the whisky matured for a minimum of three years in used bourbon casks and has a sweet, peaty aroma that is followed by notes of chewy smoke and salty liquorice. The warm finish is long and lingering, with a touch of salt and honey.

Situated just below Castle Rothes (the ancient seat of the Earl of Rothes) in the Speyside region of Scotland, the Glen Spey Distillery was founded by James Stuart in 1878. Stuart, who was a grain merchant at the time, initially began using the property as an oatmeal mill, before eventually converting it into a distillery shortly thereafter. Glen Spey Single Malt Scotch is made from pure Scottish barley, which is mashed and fermented before being distilled twice through Glen Spey's copper-pot stills. The stills are equipped with purifiers, which act as small condensers and cause a portion of the evaporating vapors in the still to be pumped back into the pot and re-distilled. As a result of the purifiers, Glen Spey produces a lighter and more delicate whisky as compared to most traditional Scotch distilleries.

Provenance Special Selection Glen Spey Single Malt Scotch Whisky was distilled in 2002 and aged for just over nine years in a used bourbon cask (Cask Number 84868). It has a fresh, sweet aroma with hints of maple syrup and sugar. The initial notes of citrus and malt give way to touches of vanilla and caramel, and ultimately lead to a toffee finish.

These four single malt whiskies represent exquisite expressions of Scotland's different whisky regions, and are a great way to sample Scotland's unique culture and terrior. Pick up the set today!