This product is available in: CA, DC, IL, NH, WA Unfortunately, we can't ship to PO Boxes and APO addresses.

Size750mL Proof91.6 (45.8% ABV)
As the youngest age-statement release in the Port Askaig range, this bold eight-year-old Askaig isn’t shy about its peat. You can expect… young fresh notes of maritime… sweet vanilla and citrus.
Notify me when this product is back in stock.

This product is available in: CA, DC, IL, NH, WA Unfortunately, we can't ship to PO Boxes and APO addresses. 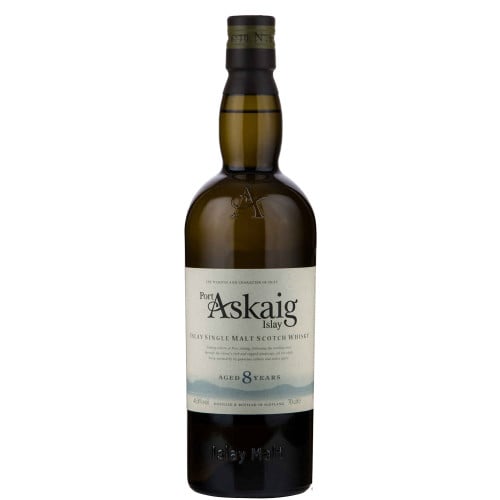 Situated on the north coast of Islay, facing the island of Jura less than 1/2 mile away on the other side of the Sound of Islay, Port Askaig is a small town. Port Askaig whiskies are Islay single malts, named after the idyllic town. Created by London-based Specialty Drinks, the company began selecting casks from some of the largest and most reputable single malt distilleries on the island and producing a series of independent single malt bottlings.

Port Askaig has a compelling range of Islay single malt Whiskies that encapsulate the unique character of Islay and its people. With a signature robust smokiness and soft fruit, this Port Askaig range was created to entice even to the most zealous and discerning of Whisky connoisseurs while also appealing to the novice Whisky drinker.

As the youngest age-statement release in the Port Askaig range, this bold eight-year-old Askaig isn’t shy about its peat. You can expect… young fresh notes of maritime… sweet vanilla and citrus.

Citrus zest on the nose with grassy and vanilla notes. The palate showcases sweet caramel, honeyed notes, meaty flavors and a savory smokiness. The finish is bold with a dose of spice.