Size750mL Proof86 (43% ABV)
This pot-still rum pays tribute to the first rum that was distilled in North America. Crafted with molasses and sugarcane, and aged in ex-bourbon barrels, this exceptional rum earned the Gold Award at the John Barleycorn Awards, 2020.
Notify me when this product is back in stock. 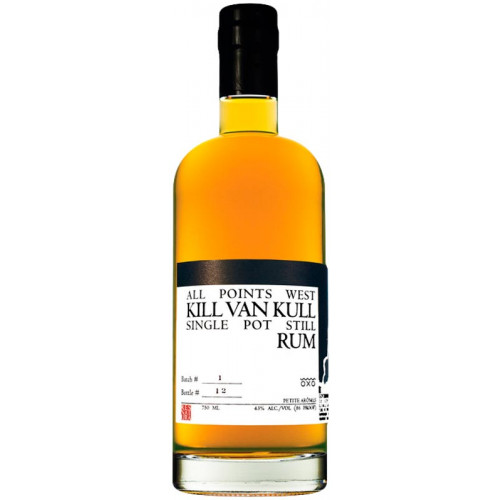 Situated in Newark, New Jersey, the All Points West Distillery was founded by Gil Spaier and takes its inspiration from the numerous breweries that were located in the city. None of the 26 that were quenching the thirst of countless immigrants by 1920 remain today. Named after the railroad that connected the ports of New Jersey with the rest of America, the distillery crafts a range of whiskey, vodka, and gin under the brand names All Points West Malt and Grain Pot Still Whiskey, Bone Black Vodka, and Cathouse Gin ― all right there in the melting pot of different cultures that is the Ironbound neighborhood. They also offer tours, tastings, cocktails, and bottles on the premises on the weekends.

Kill Van Kull is the newest addition to their lineup that follows in the footsteps of their whiskey. It's a pot-still rum that is aged in ex-bourbon barrels. Kill Van Kull is a waterway that connects New York and Newark bays. The first North America's rum distillery was founded there in 1664, producing rum from molasses that were richer in sugar and plant matter, which made for a richer, more flavorful spirit. All Points West aimed to recreate the style with richer molasses and sugarcane, crafting the Kill Van Kull expression that is distilled and aged at their base of operations in Ironbound. This exceptional rum earned the Gold Award at the John Barleycorn Awards, 2020.

It's a rich profile with tropical fruit and dark sugar on the nose, along with herbal undertones. The palate is warm and creamy with notes of molasses, vanilla, caramel, fruit and oak as well. Finishes long and slightly warming with maple syrup notes lingering.