Size750mL Proof90 (45% ABV)
Aged for upwards of 14 years, this bourbon earned a scores of 95 points at the Ultimate Spirits Challenge. 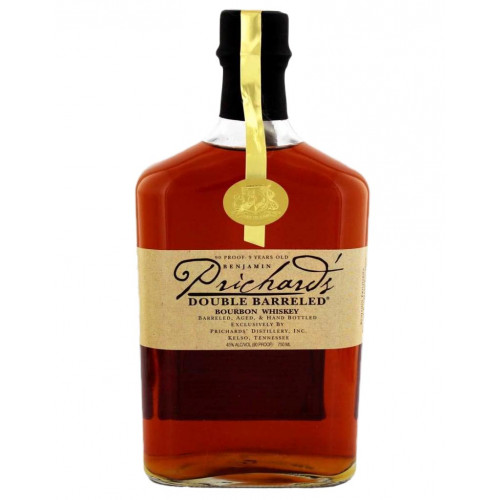 When he passed away in 1822, Benjamin Prichard passed his "still, tubs and utensils thereto" on to his son, Enoch. In the antebellum South, Prichard's Tennessee whiskey — made using white corn and pure Tennessee spring water — was incredibly popular. Enoch eventually gave up the stills, tubs and utensils that his father had passed on to him, and focused his energies elsewhere. In 1997 — five generations later — Phil Prichard took up the family business again when he opened the doors to Prichard's Distillery in Kenslo, Tennessee. The first legal distillery in Tennessee in nearly fifty years, Prichard's Distillery is located just a few miles south of where Phil's great-great-great grandfather distilled whiskey nearly two centuries ago.

Prichard's Double Barreled Bourbon Whiskey is made from a mash of white corn, rye and soft wheat. "Today, the vast majority of distilleries making whiskey in this country are making their whiskey with yellow corn," says Phil. "But you and I both know that white corn has a higher sugar content than yellow corn. It makes a fine, fine whiskey."After the grains are mashed and fermented, they are distilled before the whiskey is matured at cask-strength (120-proof) in new, charred American oak barrels for upwards of nine years. Following its initial beauty rest, the bourbon is brought to bottle-proof (90 proof) and aged again in entirely new, charred American oak barrels for an additional three to five years. While expensive and time-consuming, this double-barreling process reinforces the barrel notes of caramel, toffee and vanilla that earned Prichard's Double Barreled Bourbon a score of 94 points from Jim Murray's Whisky Bible and a score of 95 points (tying Pappy Van Winkle's 23 Year Old Bourbon) from the Ultimate Spirits Challenge.

Sweet notes of vanilla and honey. Initial palate is rich and flavorful, with touches of caramel, butterscotch, vanilla and toffee. Finish is mellow, and ends with a spicy kick.