Learn more
Size750mL Proof113 (56.5% ABV) *Please note that the ABV of this bottle may vary
The 14th annual release from the famed Port Ellen Distillery, this bottle of single malt whisky is one of the most collectible in the world.
Notify me when this product is back in stock. 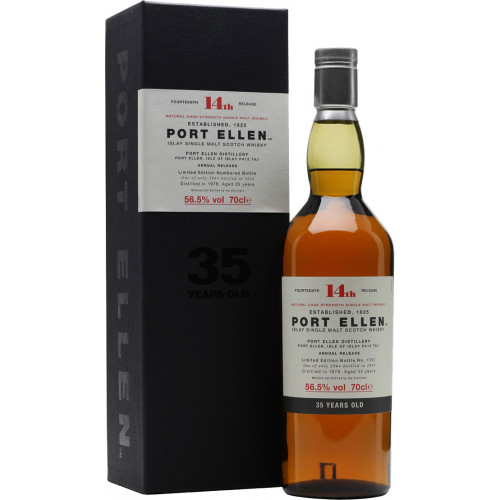 Situated along the Kildalton coast on the island of Islay, Port Ellen Distillery was founded in 1825 by Alexander Ker Mackay. At the time, the distillery became renown for its innovative and experimental techniques: it was the first distillery to incorporate Septimus Fox's spirit safe design into its distillation process, and was one of the first distilleries to trade directly with the United States.

Over the course of the 20th century, however, the distillery changed hands numerous times. In 1966, Port Ellen Distillery was reopened (it had been forced to close its doors as a result of Prohibition) and refurbished with four new stills heated by a mechanical coal stoker system. Although the distillery was forced to close its doors again in 1983 as a result of slumping demand, the whisky distilled in the 17 years between its re-opening and final closure has acquired a reputation as some of the finest to have been made on Islay in that time.

Port Ellen 14th Release Single Malt Scotch Whisky was the 14th of the official annual releases by the Port Ellen Distillery. One of the most rare and collectible whiskies in the world,Port Ellen 14th has a deep gold and amber appearance, with an understated nose defined by faint smoke, honey, cured meats and root vegetables, as well as sweeter mint and citrus notes. The palate is smooth and oily, with rich honey and sea salt giving way to ginger, toast, orange peel and a hint of dark chocolate. The finish is long and warming, with complex wood, smoke and citrus notes all intermingling.

Only 2,964 bottles of this single malt, which was bottled at cask strength, were ever produced. "Port Ellen's price has soared for a straightforward reason," says Nick Morgan. "Scarcity is the driver."

Deep gold and amber appearance, with an understated nose defined by faint smoke, honey, cured meats and root vegetables, as well as sweeter mint and citrus notes. Palate is smooth and oily, with rich honey and sea salt giving way to ginger, toast, orange peel and a hint of dark chocolate. Finish is long and warming, with complex wood, smoke and citrus notes all intermingling.