Size750mL Proof84 (42% ABV)
This rum from the Plantation Vintage series was pot-distilled in Jamaica in 2002. It then spent 10 years in ex-bourbon barrels before being transferred into cognac casks for another 3 years. It's a high-ester rum with plenty of fruity and vanilla notes that is bottled at 84 proof.
Notify me when this product is back in stock. 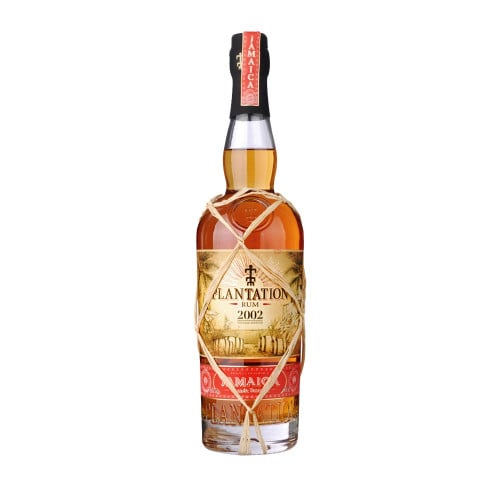 Plantation Rum is a brand of artisanal Caribbean rums, owned by Maison Ferrand, a French producer of fine spirits. The story starts with Cognac. In 1989, Alexander Gabriel discovered Maison Ferrand, one of the oldest Cognac houses, which had a good stock of Cognac and a great reputation, but its sales were lagging. Gabriel and Mr. Ferrand went into partnership, and Gabriel, who was still in business school at the time, started by building a distribution network for the brand. After putting Ferrand Cognac on the map, Gabriel went on another quest – to revitalize French artisanal spirits. Mathilde Liqueurs were born from his passion, curiosity, and refined taste for beauty, and the fond memories of his grandmother's cassis liqueur.

Gin is another of his passions, and in 1996 the company introduced Citadelle Gin, which is made in the same pot stills that produce Ferrand Cognac at the time of year when Cognac cannot be distilled under the regulations. In the 1990s, Gabriel combed the Caribbean in search of the best rums, and in 1999 Plantation Rum was created. Maison Ferrand now owns the West Indies Rum Distillery in Barbados and holds a stake in the distiller National Rum of Jamaica. It also sources its rums from some of the best distilleries from across the Caribbean.

Plantation Rum is produced using a combination of traditional and modern rum-making techniques, and most expressions undergo the brand’s signature double aging process. After aging for several years in white oak Bourbon casks in the tropics, where the angels’ share is high, the rum is shipped to France for cask finishing, including Cognac cask finishing.

The Plantation Vintages lineup consists of rare and valuable limited-edition vintages. The Jamaica 2002 expression was distilled in Jamaica using pot stills. It has spent 10 years in ex-bourbon barrels in Jamaica before being transferred into cognac casks for an additional 3 years. The high-ester rum with fruity and vanilla notes was bottled at 84 proof.

Get your bottle of this 13-year-old Jamaican rum today!

The nose opens with estery aromas typical for Jamaican pot-still rum with caramel, fruit, spices, and orange zest. The palate has tropical fruit notes, butterscotch, spice, herbs, vanilla, dried fruit, and a touch of nuttiness. The finish is complex and smooth with lingering notes.