Learn more
Size750mL Proof84 (42% ABV)
This unique whisky is a departure from Pike Creek’s signature port finish. After 10 years in bourbon barrels it gets its final rest in ex-rum casks. 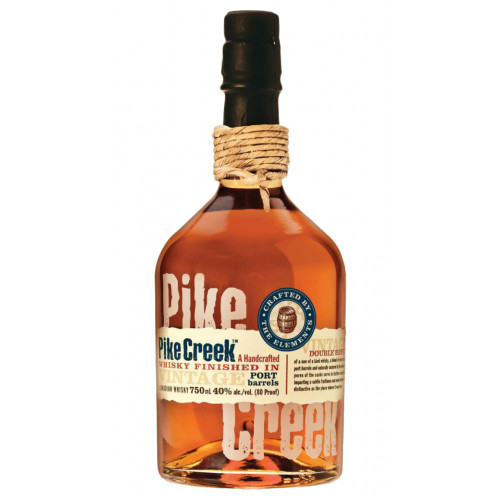 In 1832, an Englishman named Henry Corby emigrated to Belleville, Ontario (he was only 26 years old at the time). After arriving in Canada, Corby opened up a bakery and began supplying bread and other grains to the local militia. Within a few years, Corby was shipping his excess grains to Kingston, where they were sold to other bakeries and restaurants. After purchasing a gristmill in 1855 (a gristmill grinds grains into flour), Corby began distilling his excess grains into whisky and opened the doors to Corby Distillery in 1859.

Corby Distillery initially released Pike Creek Whisky in Canada during Christmas 2012. At the time, the distillery had no intention of releasing the whisky into the United States, but after much fanfare and incredible reviews, the whisky was imported into the United States in 2013.
Pike Creek Whisky is a traditional Canadian whisky, and is distilled twice through small, copper stills. After distillation, the whisky is matured in first-use bourbon barrels, which are laid to rest in a warehouse in Pike Creek (a suburb of Windsor, Ontario) for an average of seven to eight years. "In Pike Creek's non-climate controlled warehouse, the dramatic swings in temperature play a key role in the whisky's maturation process," explains Wayne Hartunian, a Corby Distillery representative.

Temperatures plunge during the frigid Canadian winters, and soar during the hot summers — Windsor has one of the greatest annual temperature configurables of any whisky region in the world. As a result of the dramatic changes in temperature, the wood barrels are forced to contract and expand, ultimately maximizing interaction with the whisky. "This interaction with the barrels adds character, complexity, and concentrated flavors to the whisky, resulting in a one-of-a-kind product distinctive to Pike Creek," says Hartunian.

This rum-finished whisky is a unique Canadian whisky that’s a departure from Pike Creeks signature spirit. It starts with a blend of soft double-column distilled corn and some once-column distilled rye that provides the base: balanced flavors of sweet caramel and toffee with warm rye spice, mature oak, and a touch of green apple. After maturing for 10 years in ex-bourbon barrels, it’s then finished in rum casks to bring out notes of island spices, brown sugar, and molasses. Soft and light-style, savor it any way you like: neat, on the rocks, or in a tasty cocktail.