Size750mL Proof80 (40% ABV)
Aged for 12 years, this whisky earned the Silver Medal at the San Francisco World Spirits Competition.
Notify me when this product is back in stock. 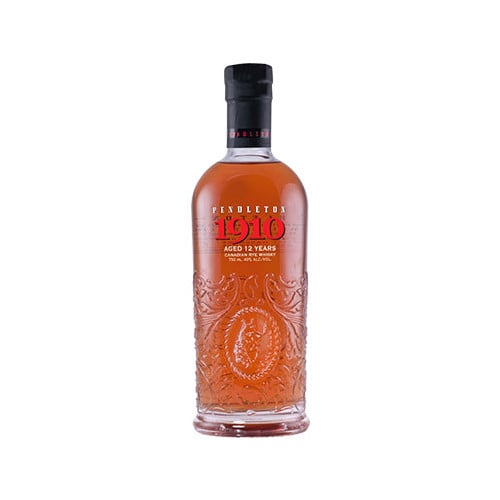 Crafted to honor the bold and independent of the American frontiersman, Pendleton Whisky is named after the Pendleton Round-Up, one of the most prestigious rodeo events in the world. The event has been held during the second week of September each year since 1910, and brings over 50,000 tourists to the city of Pendleton, Oregon.

Pendleton 1910 12 Year Old Whisky was initially crafted to celebrate the 100 year anniversary of the rodeo. The whisky is made from a mashbill composed entirely of rye grains, which are mashed, fermented and distilled in Canada. Following distillation, the whisky is brought to Hood River Distillers in Oregon, which finishes and the whisky in its own casks before bottling it at 80 proof.

Pendleton 1910 Whisky has been aged for twelve years and has a slightly sweet aroma, with hints of butterscotch, light oak and tobacco. The aroma gives way to notes of toffee, black pepper, chewy leather, honey, chili peppers and vanilla on the palate. The medium finish is well-balanced, with a touch of spice and sweetness.

The whisky earned a score of 90 points from Wine Enthusiast, and earned the Silver Medal at the San Francisco World Spirits Competition in 2012.

Slightly sweet aroma, with hints of butterscotch, light oak and tobacco. Notes of toffee, black pepper, chewy leather, honey, chili peppers and vanilla on the palate. Medium finish is well-balanced, with a touch of spice and sweetness.