Be the first to review this product
"The launch of our bourbon marks the realization of so many dreams from the team at Kentucky Peerless." — Caleb Kilburn
$72.99
Add to Wish List

Now, a century later, Peerless Whiskey is in the hands of Kraver’s great-grandson Corky Taylor and great-great-grandson Carson Taylor. Keeping Kraver’s legacy alive, the duo has resurrected the brand, even distilling under the original Distilled Spirits Plant number, DSP-KY-50 in a centuries-old warehouse in downtown Louisville, near the Ohio River. Two years after releasing its flagship 2-year-old inaugural straight rye Kentucky Peerless Distilling Co. has launched its first bourbon.

Crafted onsite from grain to bottle, Master Distiller Caleb Kilburn used a sweet mash process and non-chill filtration to craft this landmark release for the brand. Most bourbon on the market today is "sour mash" — cooked with a bit of already fermented grains (and the consistent yeast and bacteria included) from a previous distillation cycle. In contrast, "sweet mash" bourbon uses a freshly cultured batch of yeast each time.

"The launch of our bourbon marks the realization of so many dreams from the team at Kentucky Peerless" says Caleb Kilburn. Aged four years this new release is bottled at a low barrel proof 108.9, a factor of both a low distillation proof and a low barrel entry proof, setting this bourbon apart from the crowd.

Aromas of rye spice, vanilla, honey, cinnamon, and candied apricots. The palate has a rich mouth-feel with notes of creamy vanilla followed by bright citrus zest, caramel, pepper and toasted oak. The finish is medium-bodied with warm baking spices. 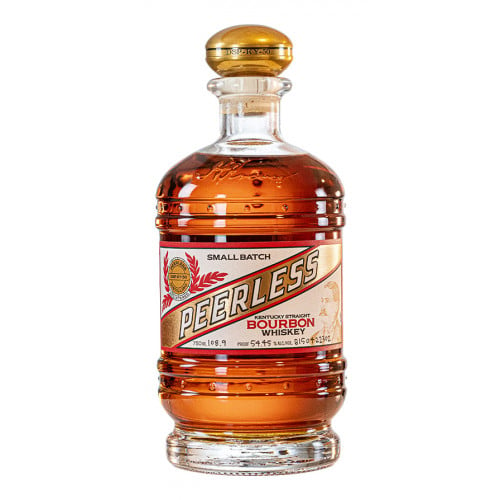