Size750mL Proof108.7 (54.35% ABV)
Up until this expression, Peerless Double Oaked Single Barrels were released due to necessity when one barrel began to leak and the whiskey needed to be transferred into a new one. Now they craft their grain-to-bottle Double Oak from the ground up in the same way.
Notify me when this product is back in stock. 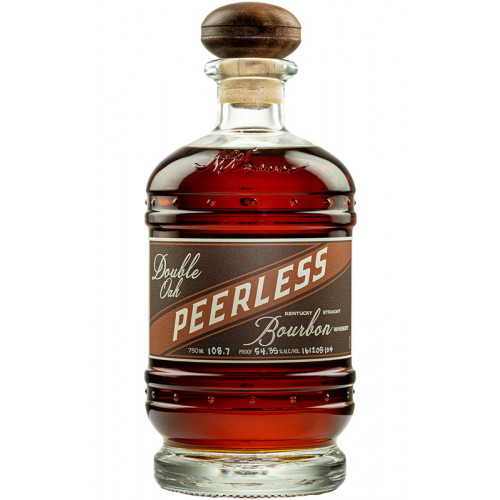 Kentucky Peerless Distilling Co. traces their roots back to the 1880s, to the heart of Henderson Kentucky. Peerless Whiskey was founded by a businessman with a bold personality Henry Kraver, who revived the brand from the brink of ruin in the late 1880s. Under Kraver’s guidance, rose from the ashes, increasing production 25-fold. But the growth of the brand was subsequently stunted by the very unforgiving era of Prohibition.

Peerless Double Oak is a grain-to-bottle bourbon that's crafted with a sweet mash. While similar expressions were first born of necessity ― a bourbon was transferred into a new barrel due to the original being leaky ― they are now crafting the whiskey from the ground up with the intention of making it into their Double Oaked. "We have decided to improve the quality and accessibility of the product. Where in the past we would leave things up to chance, we are now intentionally curating barrels to become Double Oak," says Master Distiller Caleb Kilburn. Bottled without any additional water and without chill filtration, the Double Oak is around 108 proof.