Size750mL Proof80 (40% ABV)
This smooth and accessible whiskey is light, balanced, and pure. It pays tribute to the salesman who sold Cork Distillery's whiskey to pubs. The character became so universally loved that the whiskey was officially renamed in his honor.
Notify me when this product is back in stock. 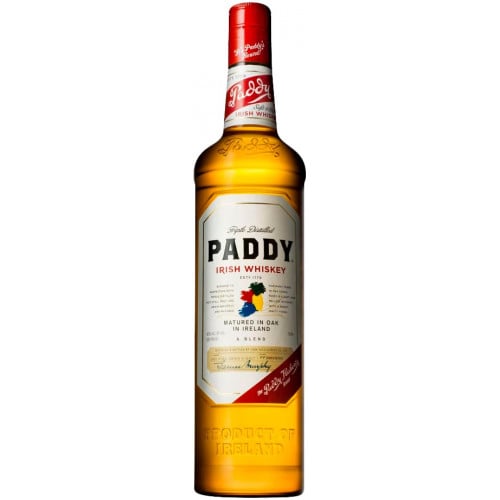 Situated in the province of Munster, the Cork Distilleries Company was founded in 1877. Two years after it opened its doors, the distillery began bottling its first whiskey, and in 1882, the company hired a young Corkman named Patrick J. O'Flaherty as their salesman. The classic charmer spent 4 decades selling his whiskey in Ireland. Known for his easygoing personality and generosity, he would ensure everybody around him always had a great time and was always buying rounds for the patrons in the pubs he visited, becoming a universally-loved character. The whiskey's original name was soon forgotten with everybody was starting to order "Paddy whiskey". In 1912, the distillery officially renamed the whiskey Paddy Irish Whiskey in his honor.

Today, Paddy Old Irish Whiskey is made from the finest malted and unmalted barley harvested from the East Cork countryside, together with water sourced from river Dungourney. It's a triple-distilled blend of grain, malt, and pot-still whiskey, each component contributing an integral part to the smoothness of the finished spirit: a floral sweetness from the grain, toasted biscuit from the malt, and creaminess from the pot-still. Light, balanced, and pure, it has a rich golden color and deep spice, honey, and vanilla notes. It is matured in 3 different oak casks, before being bottled at 80 proof.

The nose is malty, fresh, and woody with hints of spice, honey, and vanilla. Light and crisp on the palate, it has nutty, malt, and charred wood notes. Finishes with a pleasant sweetness and lingering gentle notes of wood and malt.