$43.99
Caskers Rewards members earn up to 2 store points back when buying this bottle.

Size750mL Proof130 (65% ABV)
Coming from NYC's first rum distillery after over a century, Owney's Overproof New York City Rum is bottled at a higher 130 proof and delivers a enticingly funky palate with flavors of banana and earth.
Notify me when this product is back in stock. 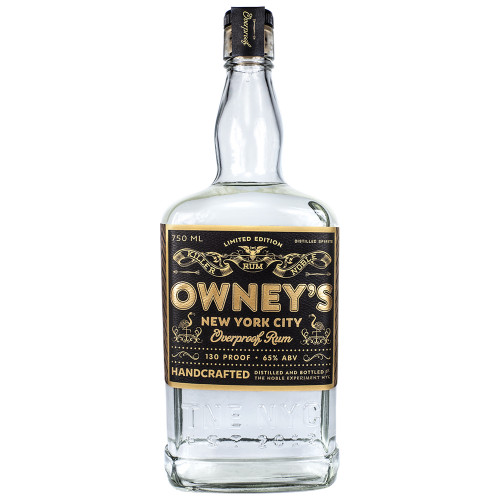 Made by Master Distiller Bridget Firtle, Owney's Overproof New York City Rum pays homage to Madden's legacy as an entrepreneur during the last era of home-grown New York City spirits. Produced in the same way as Owney's Original New York City Rum, it's bottled at a higher proof of 130 to deliver a full-blown Owney's experience.

Crafted in Bushwick, Brooklyn, from high-quality, organic, non-genetically modified molasses sourced from small farmers in Florida and Louisiana, the molasses is subjected to a long and cold fermentation process as well as a low-rectification distillation for expression of the cane juice. Ideal for those looking for a tad more funk and fire in their rum as the palate of this magnificent expression delivers flavors of banana and earth with a sharp and dry finish.

The Noble Experiment was inspired by history with a vision to revive the rum distilling tradition in New York City. It’s named after famous New York City hustler Owen “Owney” Madden, an English immigrant who came to New York City at a tender age of 11 and quickly earned a reputation as a fierce fighter. Madden became involved in bootlegging spirits — primarily rum, and he established a territory in Hells Kitchen, eventually acquiring New York City's flashiest speakeasies and nightclubs, including the legendary Cotton Club in Harlem.

Madden’s thirst for excitement, together with his "swagger, made him a perfect fit for a life of slinging homemade and hijacked spirits," says Master Distiller Bridget Firtle who founded The Noble Experiment in 2012. Firtle oversees every step of rum production. After she mashes the molasses, she ferments the mash using a proprietary strain of yeast at low temperatures for approximately five days. "Fermentation is incredibly important when making a rum, she says." "That's why we regulate the temperature when fermenting our molasses — we want to keep the environment cool and our yeast happy."

After fermentation, the wash is distilled through a custom-made 265-gallon copper pot still nicknamed Cleo. Firtle then brings the rum to proof using legendary New York City tap water and fills and labels each bottle by hand.

The enticing nose greets with aromas of grass and cane. The palate is smooth and a tad funky with flavors of banana and earth notes. Expect a sharp, dry finish with medium heat.