Size750mL Proof80 (40% ABV)
Aged for a minimum of four years, this rum earned a score of 96 points from Wine Enthusiast, which called it “perfectly balanced” and the best new rum on the market.
Notify me when this product is back in stock. 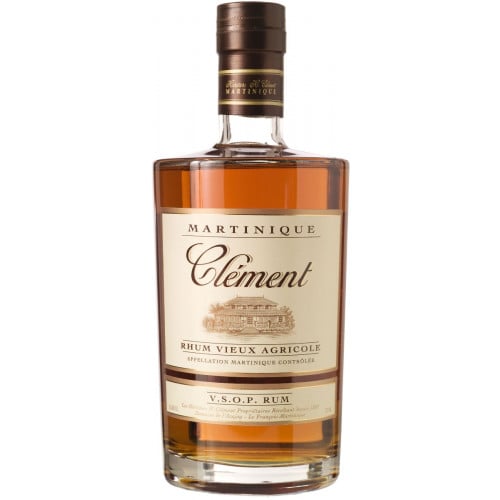 During the Napoleonic Wars, the British Navy enforced a blockade against France, resulting in a plunge in the demand for Caribbean sugar. As farmers in the Caribbean began stockpiling the excess sugarcane they had harvested, distilleries throughout the Caribbean began turning to fresh sugarcane rather than molasses in order to produce rum. These rums became known as agricultural rhums or “rhum agricoles.”

Rhum Clément is a rhum agricole crafted on the island nation of Martinque. The rhum is made exclusively from sugarcane harvested on the Domaine de l’Acajou Estate, which was purchased by Homère Clément in 1887. In order to harvest the sugarcane, expert farmers chop the stalks of the cane as low to the ground as possible in order to preserve the highest concentration of glucose (due to its weight, glucose is pulled to the bottom of the stalk by gravity). Then, within an hour of its harvest, the sugarcane is transported to the distillery and crushed in order to preserve the most fresh and raw flavor possible. Once the sugarcane juice has been extracted, it is fermented with an organic, proprietary strain of yeast before being distilled through Clément’s single-column copper still (the still is modeled after the classic Armagnac stills of France).

Following distillation, Rhum Clément VSOP Vieux Agricole is matured for a minimum of four years in virgin Limousin barriques and re-charred bourbon casks. The alchemy of the natural rhum, together with the unique variety of the oak barrels used in the maturation process, contributes a brilliant mahogany color to the rum, and provides for an aroma of cocoa beans, warm caramel and exotic spices. Notes of coconuts, bananas, papaya and creme brulee dominate the palate, and lead to a finish accented by touches of mellow vanilla and caramel.

Rhum Clément VSOP Vieux Agricole earned a score of 96 points from Wine Enthusiast, which called it “perfectly balanced” and the best new rum on the market. Pick up a bottle today!