Learn more
Size750mL Proof114 (57% ABV) - May vary *Please note that the ABV of this bottle may vary
This single cask bourbon, which is made from a four-grain mashbill and earned the Gold Medal at the San Francisco World Spirits Competition in 2013, was bottled at a robust 114 proof without the use of chill filtration.
Notify me when this product is back in stock. 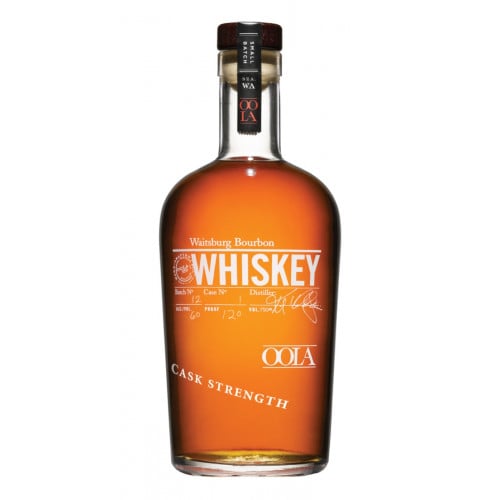 Oola Waitsburg Single Barrel Cask Strength Bourbon is crafted from a mash of approximately 65% corn and 20%-28% rye, with the remaining balance split evenly between malted barley and white winter wheat "All our grains are sourced from two organic farms in Eastern Washington," says Kirby. In addition, the use of wheat in the bourbon's mashbill "allows me to hold back on the corn and add more rye. This results in a more complex, balanced and less overly sweet bourbon." Once the ingredients arrive at the distillery, they are milled and mashed before being distilled through Kirby's copper-pot still.

Following distillation, the bourbon is matured in small, American white oak casks that are subjected to large temperature swings of up to 50-70° each day. "The idea is to extract a lot of the influence from the barrel early on in the aging process." After this initial beautyrest, the bourbon is transferred to 53-gallon, American white oak casks that boast an alligator char. The alligator char allows the whiskey to penetrate the wood, which hails from the Ozark Mountains of Arkansas, up to a ¼ inch. There, the bourbon rests for an additional three to four years. Whereas at that point, multiple casks are typically married together to create a blended bourbon whiskey, Oola Waitsburg Single Barrel Cask Strength Bourbon represents a single barrel bottling from Oola's finest stock of maturing whiskey. This particular batch no. 6, bottled at cask strength exclusively for Caskers members, produced only 216 bottles at a robust 114 proof. Doing so allows "the full richness of the nose and flavor profile to stay as intact as possible," says Kirby.

Oola Waitsburg Single Barrel Cask Strength Bourbon has a spicy aroma, with touches of cinnamon, ginger and black peppercorn that give way to notes of caramel, vanilla, cherry and oak on the palate. The finish is warm and balanced, with hints of brown sugar, toffee and maple syrup complementing each other.

Spicy aroma, with touches of cinnamon, ginger and black peppercorn that give way to notes of caramel, vanilla, cherry and oak on the palate. Finish is warm and balanced, with hints of brown sugar, toffee and maple syrup complementing each other.