Learn more
Size750mL Proof85 (42.5% ABV)
Aged for 35 years in a combination of ex-bourbon and ex-sherry casks, only 1,254 bottles of this outstanding whisky have been released worldwide.
Notify me when this product is back in stock.

This product is available in: DC, NH, NY Unfortunately, we can't ship to PO Boxes and APO addresses. 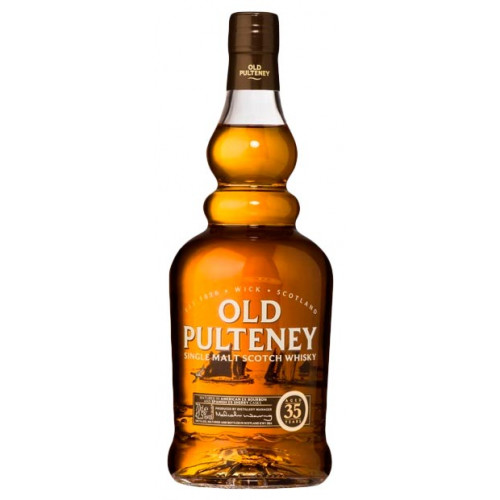 In 1826, James Henderson founded Pulteney Distillery in Wick, a fishing village situated at the northern end of the Scottish Highlands. At the time, Wick was largely isolated from the remainder of the Scottish mainland, and the distillery was dependent on the sea for its supply of barley. The isolation also led to lawlessness — legend has it that the 8,000 fishermen who inhabited the town drank approximately 500 gallons of whisky each day at one of Wick's 81 bars.

In an effort to quell the fisherman, local teetotalers voted to impose a ban on the sale of alcohol in Wick. As a result, Pulteney Distillery was forced to close its doors in 1930. For exactly 25 years, the town of Wick remained dry. Following the end of World War II, however, Wick residents turned out in force and successfully repealed the ban on alcohol, allowing Pulteney Distillery to reopen its doors in 1951. Today, the distillery continues to make whisky in the same time-honored tradition that James Henderson began nearly 200 years ago.

After barley is milled by a 90 year-old Porteus mill, the grist is mashed and then fermented in one of the distillery's six fermentation tanks. Pulteney Distillery is just one of four distilleries in Scotland to use dried yeast rather than liquid yeast cultures during fermentation. The dried yeast, sourced from South Africa, is incredibly delicate and requires careful monitoring, leading to a longer fermentation process as compared to distilleries that use liquid yeast. Following fermentation, the wash is distilled twice: first through Pulteney's copper pot wash still and then again through its spirit still.

Both stills have an usually large bulb shape below their necks (the unique design of the stills is reflected in the shape of each bottle of Old Pulteney Whisky), which gives Old Pulteney Single Malt its distinctive, oily character. The distillery's wash still, which was designed after the original wash still installed by Henderson, is missing its traditional swan neck. Rumor has it that when the original still was being installed, it was discovered that the still was too large for the room it was to be housed in, so the distillery manager at the time simply cut the neck off and repositioned the still's arm.

After distillation, Old Pulteney 35 Year Old Single Malt Scotch Whisky is aged in a combination of ex-bourbon and ex-sherry casks which have been hand-selected by Old Pulteney’s Distillery Manager, Malcolm Waring. These casks are laid to rest in the distillery's cellars, which are situated on the banks of the North Sea — the cellars’ proximity to the sea, together with the strong Gulf breeze, lends a slight saltiness to the whisky. Over the years, that signature taste of North Sea air has become synonymous with the Old Pulteney brand. After a beauty rest lasting three-and-a-half decades, the whisky is bottled without the use of any artificial colorings or chill filtration.

Old Pulteney 35 Year Old Single Malt Scotch Whisky has a sweet and spicy aroma, with notes of orange zest, dried grapes and and cinnamon. The palate is highlighted by oak, vanilla and fruit cake, as well as a slight salty character reminiscent of marshlands. The finish is long and elegant, with notes of sherry, oak tannins, old leather and pralines.

Only 1,254 bottles of Old Pulteney 35 Year Old Single Malt Whisky are being released worldwide. “From its eye catching packaging to its superior taste, the new malt is a true reflection of Old Pulteney’s outstanding quality and craftsmanship,” says Mary Clark, a senior brand manager with the distillery.

Sweet and spicy aroma, with notes of orange zest, dried grapes and and cinnamon. Palate highlighted by oak, vanilla and fruit cake, as well as a slight salty character reminiscent of marshlands. Finish is long and elegant, with notes of sherry, oak tannins, old leather and pralines.