This product is available in: DC, FL, MN, NY Unfortunately, we can't ship to PO Boxes and APO addresses.

Size750mL Proof92 (46% ABV)
A limited-edition special release to celebrate 200 years of Johnnie Walker, this is a complex and rich blend, made from whiskies at least 28 years old, including ghost stocks.
Notify me when this product is back in stock.

This product is available in: DC, FL, MN, NY Unfortunately, we can't ship to PO Boxes and APO addresses. 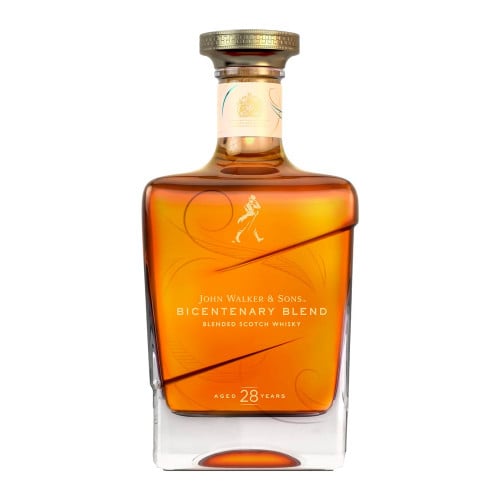 Upon his father’s death in 1820, a young grocer named Johnnie Walker invested his £417 inheritance from his farmer father into a grocery and spirits shop on High Street in Kilmarnock, Ayrshire, Scotland. While Walker himself was a teetotaller, he sold a popular single malt whisky under the name Walker’s Kilmarnock Whisky. When Walker retired from the store in the 1850s, whisky sales represented just 8% of the store’s business. In 1857, Alexander Walker — Johnnie Walker’s eldest son —took over and began improving the selection of single malt Scotch whiskies, finally establishing the Johnnie Walker brand as a favored whisky brand. Today, Johnnie Walker is owned by Diageo and it's one of the most popular Scotch whiskies in the world.

Honoring this incredible journey of 200 years and the aisles of John Walker's store, full of exotic and fragrant ingredients from all over the globe, Master Blender Jim Beveridge and his expert whisky makers took the original inventory list of flavors and crafted a complex whisky of rich layers. John Walker & Sons Bincentenary Blend is a blend of rare and exceptional whiskies, which include ghost stocks from the distilleries no longer in existence, such as Pittyvaich, Cambus and Port Ellen. All whiskies are at least 28 years old and this limited-edition release is bottled at 92 proof. Expect a complex and rich nose with fruit aromas in harmony with warming spices and smoky notes, while the palate opens up with spice mingling with sweet honey and rich molasses. The finish is sweet, spicy and lingering.

A complex and rich nose with fruit aromas of figs and sultanas, berries and candied ginger, balanced with warming spices and smoke. The palate is layered and sweet with notes of honey, rich molasses and cocoa beans balanced by spices. The finish is sweet, spicy and lingering.