Learn more
Size750mL Proof92 (46% ABV) *Please note that the ABV of this bottle may vary
Johnnie Walker Blue Label Ghost and Rare Brora is crafted using incredibly rare whiskies from the silent distilleries of Cambus, Pittyvaich and the Highland Single Malt, Brora —the heart of this special release.
Notify me when this product is back in stock. 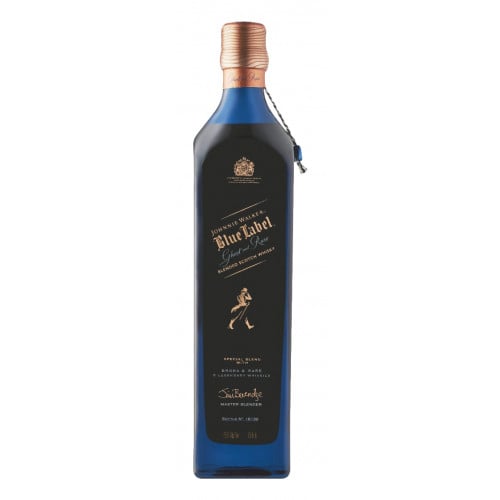 Johnnie Walker Master Blender, Dr. Jim Beveridge, has long been fascinated by how whiskies from a small number of iconic distilleries that closed many years ago can bring the extraordinary richness for which Johnnie Walker Blue Label luxury Scotch is known. In crafting Johnnie Walker Blue Label Ghost and Rare Brora, Jim Beveridge blended the three ghost whiskies with five rare expressions of malt and grains from the existing distilleries of Royal Lochnagar, Clynelish, Glenkinchie, Glenlossie, and Cameronbridge.

Johnnie Walker Blue Label Ghost and Rare Brora is crafted using incredibly rare whiskies resulting in a rich, velvety smooth blend of eight treasured Scotch Whiskies including three "ghost" whiskies from the silent distilleries of Cambus, Pittyvaich and the Highland Single Malt, Brora, which lies at the heart of this special release. Brora brings a deliciously light peatiness and sophisticated, subtle sweetness to this whisky.

The fruity sweetness of pineapple, rich notes of hazelnut and dark chocolate followed by a subtle smoky finish.