Size750mL Proof106.6 (53.3% ABV)
The Beast of Dufftown presents a 26-year-old Mortlach that was distilled in 1992, then matured in Oloroso and Pedro Ximenez Sherry casks. This premium offering is limited to 3,883 bottles.
Notify me when this product is back in stock. 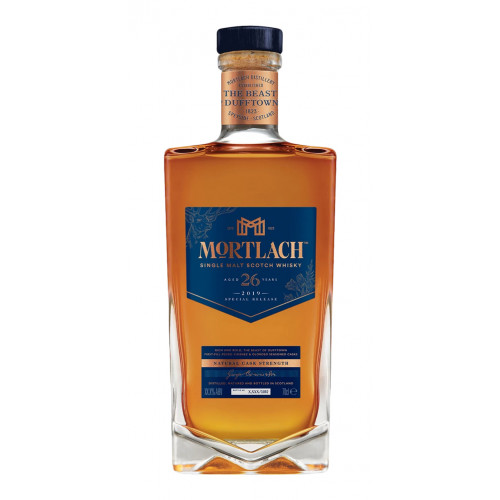 Mortlach Distillery was founded in 1823 by James Findlater, together with his friends Alexander Gordon and James Macintosh. In 1831, however, Findlater sold the distillery to John Robertson for the paltry sum of ₤270. In 1837, it was sold again to John and James Grant, who dismantled the distilling equipment and shuttered the doors to the distillery. For the next two decades, the building was used first as a brewery, and then, rather curiously, a church. In 1851, however, the distillery began producing whisky once more. Even at the time, it was an impressive distillery, according to the Wine & Spirits Trade Record. The distillery had two still-houses: "in one there are three old-fashioned stills… in the other there are three larger stills, installed in 1897." The distillery also had "four gigantic malt floors, and the largest mash tun in the district."

In 1964, the distillery was largely rebuilt and today houses a unique configuration of six stills. The stills — three wash stills and three spirit stills — are each different shapes and sizes (one is still nicknamed "Wee Witchie" because it is shaped like a witch’s cap), and aren’t paired together. This unusual configuration, together with the partial triple distillation method used at Mortlach Distillery, produces a whisky that is full-bodied and meaty.

The Mortlach 26 Year Old 2019 is a part of Diageo's Special Releases that come with the tagline "Rare by Nature." It's a premium and heavily sherried single malt offering that was distilled in 1992 and has been matured in first-fill Oloroso and Pedro Ximenez Sherry casks then bottled at cask strength. Comes in a beautiful box with a golden depiction of the Highland stag and is limited to 3,883 bottles.

Get this strictly limited-edition bottle today!

The complex nose features notes of wood, nuts, peaches, dried fruit and dates, along with toasted oak and leathery overtones. It's full-bodied and extra-creamy on the palate with chocolate and vanilla, leather and tobacco, raisins, dark fruit, and gingerbread. Finishes extremely long and slightly warming with notes of pepper, orange zest, a pleasant sweetness, and lingering chocolate and salted caramel.