Be the first to review this product
Aged for 12 years, this bourbon earned the Double Gold Medal at the 2013 Denver International Spirits Competition.
$73.99
Add to Wish List

Charles W. Medley, president of his namesake distillery in Owensboro, Kentucky, is a seventh generation master distiller. His family’s roots run back to the birth of Kentucky bourbon; while Reverend Elijah Craig is usually credited with producing the first bourbon whiskey at his mill in Lebanon in 1789, Medley’s ancestors were distilling whiskey at the same time in the adjacent county in Kentucky. In fact, except during the thirteen years during which distillation was outlawed in the United States, a member of the Medley family has been operating a distillery continuously since 1812.

Following the repeal of Prohibition in 1933, Thomas Aquinas Medley began production of a new bourbon in the heart of Kentucky. Thomas died shortly thereafter, but the Medley Distilling Company continued to produce Kentucky bourbon for the next five decades. Today, under the tutelage of Charles W. Medley and his son Samuel, the distillery (recently renamed the Charles Medley Distillery) continues to distill bourbon using the same recipes and techniques that generations of Medleys perfected over the past two centuries.

Old Medley 12 Year Old Kentucky Straight Bourbon Whiskey is made using a family recipe of corn, rye and barley, which is fermented with an eight-generation old yeast strain (the exact type of yeast used remains a closely guarded family secret). Following fermentation, the wash is distilled twice through a copper-pot still before being matured in new, charred American oak casks for twelve years. The intense Kentucky heat causes the wood and whiskey to mingle often, adding notes of spicy oak, cinnamon and caramel to the bourbon, which is nicely balanced by touches of toffee and semisweet chocolate. Once the bourbon has reached its peak flavor, each batch is brought to proof using pure, Kentucky limestone water before being bottled by hand.

Old Medley 12 Year Old Bourbon earned the title “Best in Show” and the Double Gold Medal at the Denver International Spirits Competition in 2013, and only 2,500 cases will be released this year. Try an old, small batch bourbon made by seventh and eighth generation distillers today!

Aromas full of lacy, grainy detail, with clean oak and wood spice and a whiff of rye. Initial notes of spicy oak, cinnamon and caramel, which are nicely balanced by touches of aged vanilla, semisweet chocolate, pecan and pears. Smooth, soft finish. 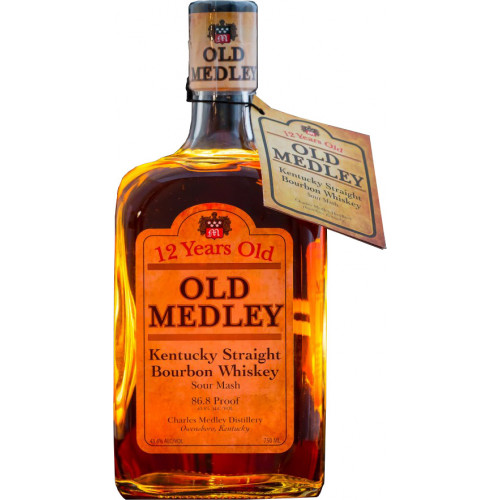