Size750mL Proof114 (57% ABV)
This barrel-proof bourbon, which has an unusually high rye content leading to lighter, spicier flavors, is bottled at a remarkable 114 proof.
Notify me when this product is back in stock. 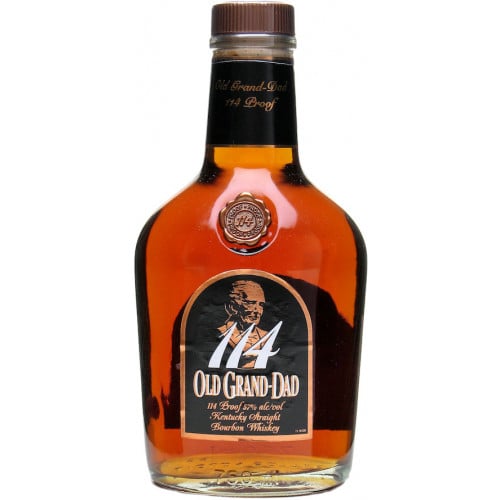 Featured prominently in classic American songs such as "I Drink Alone"by George Thorogood and preferred by James Bond is his old-fashioned cocktails, Old Grand-Dad is more than just a clever name — Old Grand-Dad was in fact a real person by the name of Basil Hayden who gained notoriety throughout the 1800s for making bourbon with a higher rye content. The elder Hayden passed down his passion for distilling to his son and then his grandson, R.B. Hayden, who honored his grandfather by dubbing the family's special recipe, "Old Grand-Dad."

The Hayden family first established a commercial distillery in 1840, and Old Grand-Dad has been production continuously ever since. Even during Prohibition (by then, the bourbon had been sold to the Wathen family, another prominent whiskey family at the time), Old Grand Dad was one of just a handful of spirits sold as prescription medicine through the American Medicinal Spirits Company.

Old Grand-Dad 114 Bourbon Whiskey is noticeably spicy on the nose, with strong oak notes and deeper hints of rye grains, leather and candied sugar. The bourbon's taste retains many of the spicier flavors, including pepper and tobacco, with the slight sweetness from the aroma becoming more discernible through touches of pear, apricot, vanilla and caramel that are evident on the palate. The finish is dominated by long-lasting notes of oak and vanilla.

Spicy on the nose, with strong oak notes and deeper hints of rye grains, leather and candied sugar. More spiciness, pepper and tobacco on the palate, with the slight sweetness from the aroma becoming more discernible through touches of pear, apricot, vanilla and caramel. Finish is dominated by long-lasting notes of oak and vanilla.

3.9 out of 5
(2 reviews)
Write a review
Real email address is required to social networks
Sign in
Login with Google
Login with Facebook
Or
We also recommend