Rating:
91%
(3)
Inspired by the film the “Kingsman: The Golden Circle,” this expression is a bold blend of hand-selected casks of Old Forester’s renowned Kentucky Straight bourbon. This whiskey won a Masters at the American whiskey Masters Competition.
$59.99
Add to Wish List

Old Forester Classic Kentucky Straight Bourbon touts itself as the first bourbon ever bottled. The bourbon is made from a mash of corn, rye and malted barley — after the grains have been milled and mashed, they are fermented for five to seven days with a proprietary yeast strain that is grown fresh daily at the distillery. This extra-long fermentation process ensures that the bourbon has an unparalleled depth and complexity. Following fermentation, the grains are twice distilled before being matured in new, American oak casks.

Inspired by the film the “Kingsman: The Golden Circle,” this expression is bold and blended to 95 proof from hand-selected casks of Old Forester’s renowned Kentucky Straight bourbon “from the warmest places in the warehouse. Because true character is only revealed after a little heat” (producer). In a statement, President of Old Forester Campbell Brown proclaimed “…We’ve created an Old Forester Statesman product that is very different from the Old Forester that you would be buying today. It's in an older sort of bottle, it's a premium expression of what we make.” Winner of a Masters at the American Whiskey Masters Competition, the Statesman is an exceptional balance of heat and spice.

Devil's food, clove and oak spice with an undercurrent of raw vanilla on the nose. Buttery leather is quickly dominated by a bold flash of pepper, cinnamon bark and sharp citrus on the palate. The finish is full of intense spice and eucalyptus which fade into orange cream and caramel. 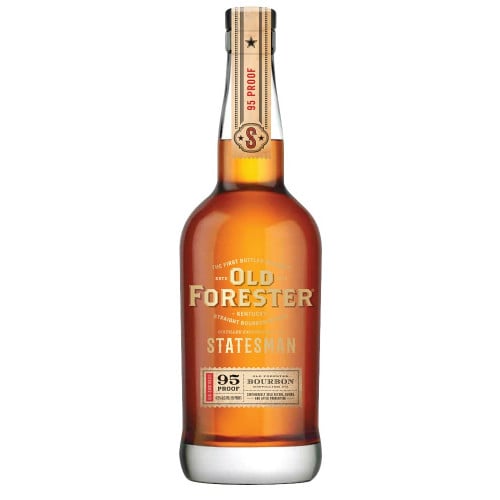