Learn more
Size750mL Proof105 (52.5% ABV) *Please note that the ABV of this bottle may vary
A carefully curated expression, this bourbon is the 19th edition of an annual legacy.
Notify me when this product is back in stock. 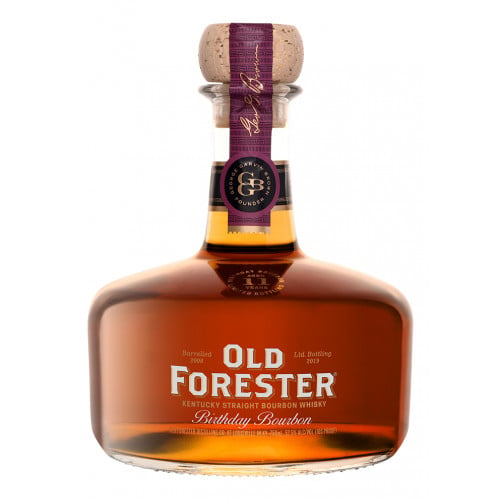 Old Forester Birthday Bourbon is made from a mash of corn, rye and malted barley. After the grains have been milled and mashed, they are fermented for five to seven days with a proprietary yeast strain that is grown fresh daily at the distillery. This extra-long fermentation process ensures that the bourbon has an unparalleled depth and complexity. Following fermentation, the grains are twice distilled before being matured in new, American oak casks for twelve years.

This special bourbon honors the birthday of Old Forester founder George Brown, who was born on September 2. The bourbon is crafted from whiskey distilled in a single day of production. Since the limited-edition bourbon is vintage-dated, it can never be replicated. This 19th edition of Old Forester Birthday Bourbon is the highest proof yet. This year’s limited edition is bottled at 105 proof. Aged 11 years it is slightly younger than its legendary predecessors.

Old Forester Master Distiller Chris Morris and Master Taster Jackie Zykan hand-selected 120 barrels for this annual release. Distilled from a mash bill of 72% corn, 18% rye, and 10% malted barley the barrels were laid down on May 15, 2008, and matured on the second floor of Warehouse #I.

Expect a sweet nose of butterscotch and toffee upheld by layers of sweet melon and cornbread. Flavors of rich oak spice and blackcurrant warm the palate coupled with light maple, caramel cake, and white floral notes. The finish is complex with notes of peppermint tea sweetened with honey, with ever long Szechuan Peppercorn.

A sweet nose of butterscotch and toffee upheld by layers of sweet melon and cornbread. Flavors of rich oak spice and blackcurrant warm the palate coupled with light maple, caramel cake and white floral notes. The finish is complex with notes of peppermint tea sweetened with honey, with ever long Szechuan Peppercorn.