Learn more
Size750mL Proof92 (46% ABV) *Please note that the ABV of this bottle may vary
This new Old Charter Oak French Oak is the second release in the Buffalo Trace’s bourbon series and is the result of the distillery acquiring a small number of barrels from France in 2007. 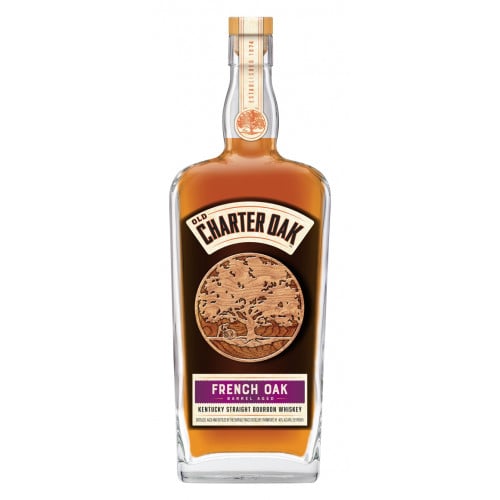 Buffalo Trace Distillery is the oldest continually operating distillery in the United States and includes the rich legacies of master distillers such as E.H. Taylor, Jr, George T. Stagg, Albert B. Blanton, Orville Schupp, and Elmer T. Lee. Today, the distillery is still family-owned, operating on the same 130 acres of land adjacent the Kentucky River as it has for over 200 years.

Buffalo Trace’s Old Charter Oak bourbon series is a line up of American whiskeys released to explore how barrels made from trees that grew in different countries, climates, and soil affect the flavors of the whiskey. The first series showcased Mongolian Oak, and now the series has returned with a new expression focused on French oak.

Old Charter dates back to 1874 when Adam and Ben Chapeze created the bourbon. It gets its name from the Charter Oak tree, a symbol of American independence and free spirit, which grew in Connecticut around the 12th century until it fell in a storm in 1856.

This new Old Charter Oak French Oak is the result of the distillery acquiring a small number of barrels from France in 2007. These barrels, crafted from oak harvested from the forests of France, were filled with Mash #1, the same recipe used to make Buffalo Trace, Eagle Rare, and a number of other bourbons. The nature of French oak imparts more subtle, silky flavors than its American counterpart as a result of its tighter grain. Aged for 12 years this bourbon is bottled at 92 proof.

French Oak is bottled in an elegant glass vial with a cork finish. Each bottle displays an oak medallion of the Charter Oak tree. Expect a nose of vanilla with hints of apricot, cherry, and rose petal.  The palate is thick and creamy with maple syrup, followed by the oak flavor shining through. A long finish of chocolate and toasted oak round it out.

A nose of vanilla with hints of apricot, cherry, and rose petal.  The palate is thick and creamy maple syrup, with the oak flavor coming through. A long finish of chocolate and toasted oak round it out.