Learn more
Size750mL Proof112.4 (56.2% ABV) *Please note that the ABV of this bottle may vary
Released as part of Diageo's 2021 Special Releases Collection, this single malt was distilled, matured, and bottled in Scotland. The expression has spent 12 years in ex-bourbon and refill casks before being bottled at 112.4 proof.
Notify me when this product is back in stock. 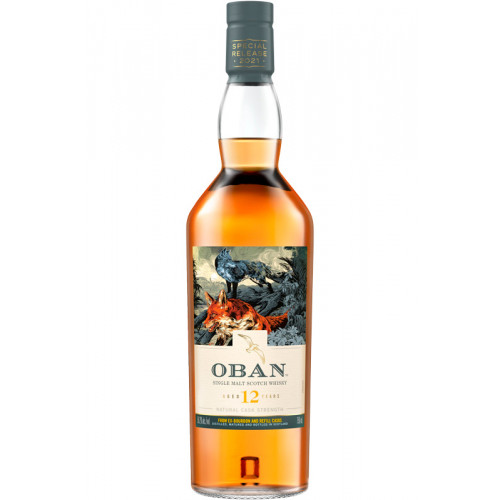 Oban Single Malt Whisky is made using 100% barley, which is malted to the distillery's exact specifications. After the barley is malted, it is partially germinated and gently dried over a peat kiln, giving it a slightly smoky, malty flavor profile. Then, the malted barley is mashed and fermented before being twice-distilled through Oban's lantern-shaped copper-pot stills. The stills are among the smallest in Scotland, limiting Oban's production to just 650,000 liters of whisky annually.

Diageo's 2021 Special Releases Collection follows the theme of hidden stories within iconic distilleries, connected via mythical creatures depicted on the bottles. Distilled, matured, and bottled in Scotland, this Oban 12-year-old single malt Scotch whisky was aged in ex-bourbon and refill casks. Bottled at cask strength (112.4 proof), it's a layered whisky with a light and dark side. Sweet chili, citrus, and sweetness on one side are balanced with maritime brine, oak spice, and a peppery finish on the other.

The nose opens with sweet chili aromas along with hints of brine and charred oak. On the palate, you'll find a pleasant sweetness with citrus, orange, and oak spice. The finish is long and peppery with a pleasant warmth.