Size750mL Proof80 (40% ABV)
Certified organic, this cachaça is matured for two years in used Kentucky bourbon barrels and earned a score of 91 points from Wine Enthusiast.
Notify me when this product is back in stock. 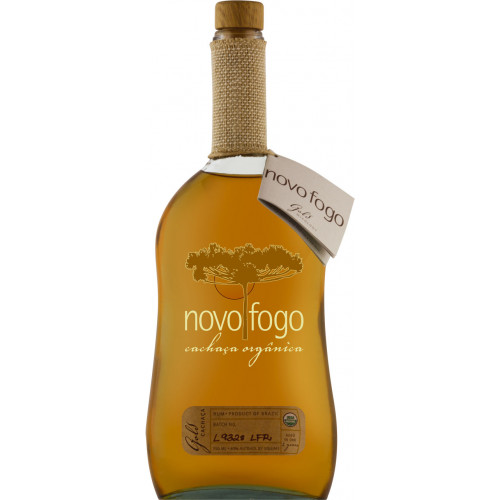 Situated in the foothills of the Serra do Mar mountains in eastern Brazil, the quaint town of Morretes is home to approximately 15,000 residents, including Agenor Macarri Jr., the master distiller at Agroecológica Marumbi. Macarri, who received a graduate degree in Cachaça Agronomy from Universidade Federal do Parana in Curitiba, is often referred to as Dr. Cachaça. Macarri has studied every component of cachaça production, from the genetics of sugar cane to the exposure of cachaça to different types of wood.

Novo Fogo Organic Gold Cachaça is made from 100% estate-grown, organic sugarcane grown without the use of chemicals or preservatives. While many sugarcane farmers burn their fields prior to harvesting their plants (burning enables faster cultivation), Novo Fogo refuses to use flame-harvesting due to the detrimental effects it has on the sugars residing in the base of the cane stalk. Rather, when the sugarcane reaches its peak of maturity, expert farmers at the Novo Fogo estate tenderly harvest the crops by hand.

After the sugarcane is harvested, it is pressed to extract the sugar cane juice. The juice is then mixed with with organic corn, rice and lime juice and is fermented for approximately 24 hours. After fermentation, the wash is distilled in one pass through Macarri's 1,200-liter copper-pot still (the bagasse — the dry, fibrous residue remaining after the sugarcane stalks are pressed — is used to heat the still). "We use pure sugar cane, grown organically and processed manually, with no chemicals, so why should we distill it twice?"asks Macarri. "There are no impurities in it to remove through multiple distillation."

After distillation, the heads and tails of the distillate are cut, and the remaining cachaça is matured in used Kentucky bourbon barrels. Prior to their use, however, the bourbon casks are disassembled, sanded and re-toasted in order to ensure that the cachaça is able to absorb the requisite tannins from the oak.

Novo Fogo Organic Gold Cachaça is matured for just over two years, giving it a nose of toffee and vanilla, which gives way to notes of brioche, honey, dried fruits and banana bread. After its two-year slumber, the cachaça is brought to proof and each hand-blown bottle is then filled and labeled by hand.

Novo Fogo, which means "new fire"in Portuguese, won't burn you. The cachaça earned a score of 91 points from Wine Enthusiast. Pick up a bottle today!

Aroma of caramel, toffee and vanilla. Initial notes of cinnamon and honey give way to sweeter notes of dried fruits, particularly bananas. Finish is smooth, with a touch of light oak, sugar cane and spice.