This product is available in: DC, IL, NH, NJ, NY Unfortunately, we can't ship to PO Boxes and APO addresses.

Size750mL Proof80 (40% ABV)
This cherry whiskey is a marriage of Leopold Bros. traditional sour mash small batch whiskey, and the juice of northern Michigan Montmorency cherries.
Notify me when this product is back in stock.

This product is available in: DC, IL, NH, NJ, NY Unfortunately, we can't ship to PO Boxes and APO addresses. 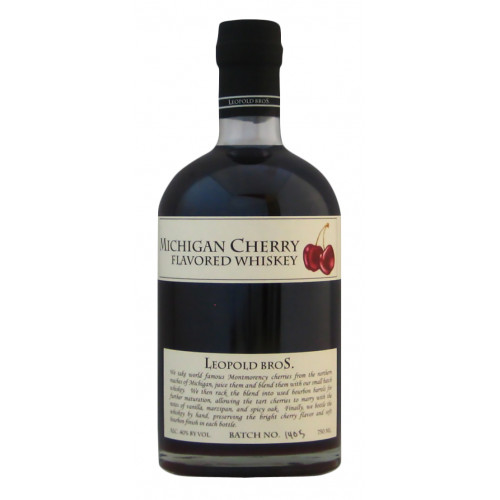 Together, the Leopold Brothers attempt to marry chemistry with poetry — and it's working. They are an independent distillery that carries out every step of production onsite. They floor malt, mill, mash, and ferment all the grains in their spirits, and distill, age, and bottle their entire range at their single distillery in Denver. They have the largest floor malting room in the U.S., where they malt their barley.

Leopold specializes in small batch products, made from scratch, with natural ingredients. They craft award-winning whiskeys, gins, vodka, liqueurs, fernet, absinthe, and apertivo. They are well known for their eco-brewing techniques and organic ingredients. They received 'Distillery of the Year' award from the American Distilling Institute in 2015.

Sweet cherry pie notes on the nose that echo all the way through to the palate. The finish is lingering with decadent notes of vanilla and spice.