Size750mL Proof88.8 (44.4% ABV)
Aged 30 miles out to sea, this bourbon is a reflection of Nantucket's unique geography and climate.
Notify me when this product is back in stock. 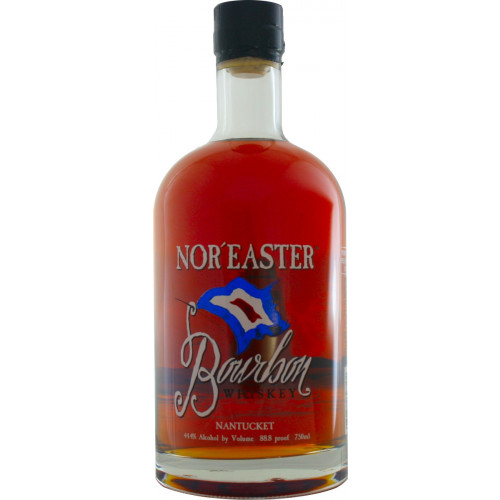 While the West Coast of the United States may suffer from torrential rainfall, the Midwest from freezing blizzards and the Southern Plains from unyielding tornadoes, the East Coast of the United States sometimes receives all three in the form of a nor'easter. A nor'easter, a type of massive cyclonic storm, takes its name from the strong, northeasterly winds that travel across the Mid-Atlantic and wreak havoc upon New England.

"I've lived in New England most of my life, and I've spent the last 16 years on Nantucket," says Jay Harman, Triple 8 Distillery's President. "I've been through my fair share of nor'easters." On November 7, 2012, just one week after Hurricane Sandy hit New England, a powerful nor'easter with wind gusts in excess of 80 miles per hour wreaked havoc along the Nantucket waterfront and left the island isolated from the mainland, as ferry and airplane services were suspended. "We enjoyed a few Nor'Easter Bourbons then," says Harman.

Nor'Easter Bourbon, named for these legendary storms that have battered New England, is made from a mash of 60% corn, 35% barley and 5% rye. After distillation, the bourbon is aged 30 miles out to sea, typically from four to eight years in 53-gallon, charred American oak barrels sourced from the Buffalo Trace Distillery in Kentucky.

"Our climate and geography have a real noticeable impact on the taste of the bourbon," says Harman. The distillery's proximity to the ocean and marine haze (Nantucket is nicknamed "The Grey Lady") add a touch of salt to the bourbon. The hints of salt are complimented by notes of mild vanilla, sweet corn and a touch of honey, which precede a medium-long, smooth finish.

After its more than eight year beauty rest, Master Distiller Randy Hudson brings the bourbon to 88.8 proof ("this is The Triple 8 Distillery after all," he says) before filling each painted-glass bottle by hand.

Pick up a Nantucket treasure today!

Hints of salt are complimented by notes of mild vanilla, sweet corn and a touch of honey, which precede a medium-long, smooth finish.