Size750mL Proof100 ( 50% abv)
While starting as a bottler of single barrels, this whiskey is a small-batch expression meant to be accessible both in terms of availability and taste profile. The 100-proof spirit is a blend of 4-year-old and 7-year-old Indiana rye and has won a Gold Medal at the 2021 edition of the San Francisco World Spirits Competition.
Notify me when this product is back in stock. 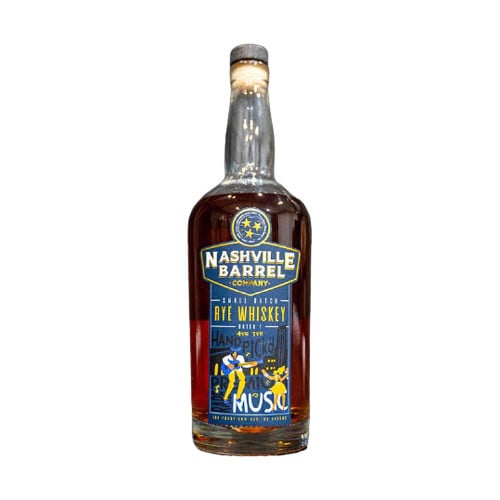 There's no elaborate story behind Nashville Barrel Company ― just a love for great whiskey. Michael Hinds started picking out barrels as a passion project, seeking special barrels that he would bottle for fundraisers, his private label being called "Fuck Cancer". Picking barrels has been his hobby for years before the project naturally transformed into the Nashville Barrel Company. The first 3 cask-strength rye whiskeys he bottled under the new moniker were sold out in an hour. The company has broadened its offerings since then, having sold bourbon, rye, rum, tequila, Canadian rye, and even barrel-aged stouts. With rapid expansion, their brick&mortar headquarters are scheduled to open in the Railyard District of Downtown Nashville in 2021.

The Nashville Barrel Company Small Batch Rye was their foray into bigger releases that would find their way onto more store shelves. This isn't a single-barrel release, but rather a small-batch rye whiskey that is meant to be more accessible both in terms of availability and taste profile, highlighting the sweet and savory notes of rye whiskey. It's a blend of 4-year-old and 7-year-old Indiana rye that is bottled at 100 proof. Suitable for sipping or cocktails, each batch is going to have a unique character, reflected on the label ― with this one the theme is music. It has already won a Gold Medal at the San Francisco World Spirits Competition in 2021.

Get your bottle of this award-winning small-batch rye today!

The nose opens with oak, cinnamon, and fruit aromas. There's vanilla, charred oak, white pepper, as well as some dark fruit notes on the palate with a touch of earthiness. The finish is medium with oak, leather, and spice.