Learn more
Size750mL Proof90.8 (45.4% ABV) *Please note that the ABV of this bottle may vary
Originally opened in 1833, Boone County Distilling has had quite a past. It was re-launched in 2015 at a different location. This expression pays tribute to the rich history of the distillery and is crafted with a mash bill of 95% rye and 5% malted barley.
Notify me when this product is back in stock. 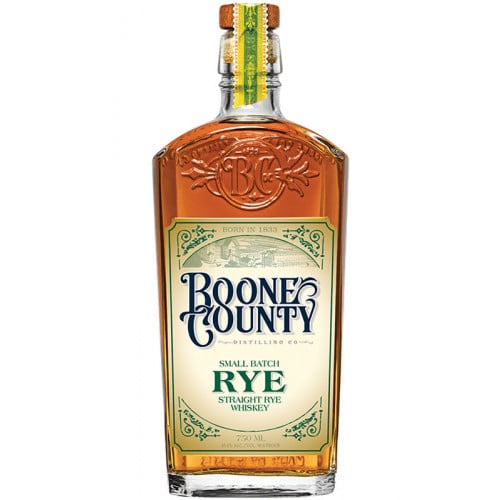 It's been quite a journey from the beginnings of Boone County Distilling in 1833 up until the release of the Boone County Small Batch Rye Whiskey. The distillery that was opened by the Snyder brothers was eventually shut down, only to be re-established nearly a century later at a new location in Independence, Kentucky by Jack Wells and Josh Quinn. This expression pays tribute to the rich history of the distillery. Crafted from a mash bill of 95% rye and 5% malted barley, it's a bold, rich, and flavorful expression with notes of caramel, rye bread, fruit, baking spices, oak, and vanilla. It's bottled at 90.8 proof.

Grab your bottle of this bold and delicious rye whiskey today!

Almost two centuries later, this is the same pioneering spirit that Boone County Distilling Company now crafts their authentic bourbon in the northern foothills of Kentucky. The brand infused with the stories of those who came before, men like Snyder, Col William Appleton, J.C., Jenkins and James Gaff. Julius Freiberg and Levi Works.
Explore all Boone County bottles >>

The amber-gold rye leads with aromas of caramel, rye bread, stone fruit, and baking spices. It's bold and sweet on the palate with rye, oak, vanilla, caramel, and graham crackers. The finish is sweet and rich with lingering baking spice notes.