Size1500mL Proof100 (50% ABV)
This Heaven Hill 2-pack consists of 2 award-winning bottled-in-bond whiskeys: a straight bourbon that shares the heritage of Evan Williams Black Label, and a classic 4-year-old rye, produced in the tradition of Pennsylvania rye whiskeys.
Notify me when this product is back in stock. 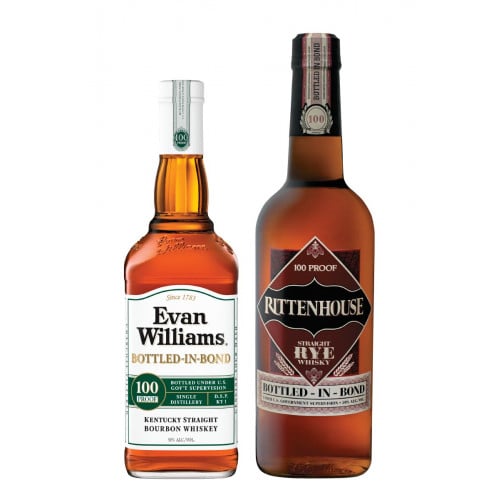 After emigrating from Wales to Kentucky in 1783, Evan Williams established a distillery along the banks of the Ohio River. The location of his eponymous distillery, situated on the banks of the Ohio River, is officially marked, declaring Evan Williams as Kentucky’s First Commercial Distiller. Evan Williams was an American pioneer being one of the first distillers in the US to use corn. The Evan Williams brand was founded in celebration of Williams. Evan Williams has long been ranked as one of the world's best-selling whiskey brands. The Evan Williams Bottled-in-Bond is crafted with a mash bill of 78% corn, 12% malted barley, and 10% rye. It shares the heritage of Evan Williams Black Label, the 2nd best-selling brand of Kentucky straight bourbon. Being bottled-in-bond, it is bottled at 100 proof and aged at least 4 years. The expression has garnered several of the most prestigious awards in the past couple of years.

Rittenhouse Straight Rye Whisky is a Kentucky rye whiskey crafted using the same traditions that Pennsylvanians used to craft Monongahela Rye over two centuries ago. After the grains are mashed and fermented, the whiskey is distilled and aged in new, charred American oak casks for a minimum of four years (although the average age of the rye is closer to six years old). Following maturation, the whiskey is bottled-in-bond at 100 proof. It earned the Double Gold Medal at the San Francisco World Spirits Competition, where it was named the North American Whiskey of the Year, among numerous other awards.

Evan Williams: The nose of this light gold whiskey has caramel, vanilla, oak, and barley aromas. Citrus, vanilla, and black pepper are on the palate, culminating in a long, warm, and dry finish.

Rittenhouse BiB: Aromas of dried fruit, toffee, and sweet peppers are on the nose. Notes of cocoa, citrus, cinnamon, nutmeg, and vanilla are on the clean & rich palate. The finish has lingering maple and spice notes.