Size750mL Proof85 (42.5% ABV)
Corsair Dark Rye American Whiskey is made from a mash bill of 61% malted rye, 4% malted chocolate rye, and 35% malted barley. This award-winning expression is technically both a rye and a malt whiskey, and is accordingly versatile.
Notify me when this product is back in stock. 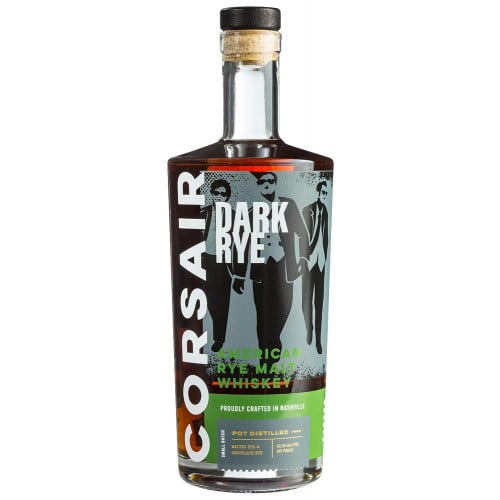 Corsair Distillery was founded in Bowling Green, KY, in 2008 by childhood friends, Darek Bell and Andrew Webber. The two were home brewing beer and wine in Darek and Amy Lee Bell’s garage, and developing a prototype bio-diesel plant, which did not go according to plans, when they got the idea to start making whiskey. In 2010, Corsair arrived in Nashville, TN, becoming the first craft distillery in Nashville since Prohibition. The distillery has grown with the city, and in 2016 Corsair opened its second Nashville location, which allowed them to create craft whiskey on a higher production scale.

Darek, who was named one of the 10 most pioneering distillers by Spirits Business Magazine, focuses on new recipes for spirits using alternative grains, unconventional smoked grains, and unusual botanicals, while Andrew likes using unusual ingredients in traditional distillations to yield novel, big, aggressive flavors. Together with their team, they create innovative and adventurous small-batch spirits, which have won over 800 medals at national and international spirits competitions. Corsair also makes craft beers, utilizing local farms, and its local malt house and smokehouse to put "Nashville in a bottle."

Corsair Dark Rye American Whiskey is made from a mash bill of 61% malted rye, 4% malted chocolate rye, and 35% malted barley. Instead of filling up the mash bill with corn, the Corsair Distillery uses malted barley, which produces exceptionally smooth rye whiskey with chocolate, coffee and spice notes. This also makes this expression technically both a rye whiskey and a malt whiskey, and shows Corsair’s desire to do things differently. Corsair never uses artificial flavors or colors, achieving superior flavor and color through quality malted rye and barley, innovative distillation and small barrel maturation. This expression is made 100% in house at the distillery, and is never sourced.

Rye and citrus fruit with a hint of chocolate on the nose are followed by rye malt spice and oaky sweetness on the palate. The finish is clean, with a lingering chocolatey rye after tone.