Size750mL Proof114.2 (57.1% ABV)
Usquaebach “An Ard Ri" —which translates to "The High King" in Gaelic- is a special blend of over 20 casks of single malt from the Highlands.
Notify me when this product is back in stock. 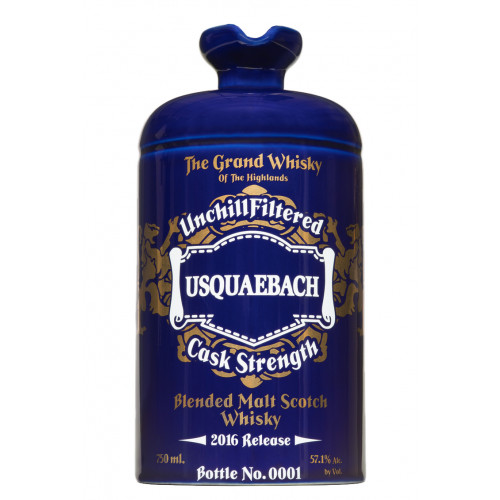 Translated from Gaelic as “the water of life,” Usquaebach – pronounced “oos-ke-bah” – is the etymological root of the modern word “whisky.” “With Usquaebach we’ll face the devil,” says Scottish poet Robert Burns in his famous 1791 work Tom O’Shanter.

While the word itself was first trademarked in 1877, the blend used in Usquaebach Blended Scotch Whisky actually dates back to the 1700s, when traveling merchants and artisans would combine spirits from the highest-caliber single distilleries to create fiery, sophisticated blends consumed by people throughout the country’s rolling hills.

Usquaebach “An Ard Ri" —which translates to "The High King" in Gaelic- is a cask strength meticulous Scotch whisky blend of over 20 casks of single malt from the Highlands. This special offering is blended before being married and finished in sherry casks to enhance the flavor. Bottled at cask strength (57.1% ABV), “An Ard Ri” carries a long and textured finish that will satisfy any whisky drinker.

On the nose are notes of tobacco, leather, plums, candied fruits, subtle smoke. The palate is full bodied with cinnamon, baked pears, and wine tannins. The finish is refined with notes of rich spice and chocolate.