Size750mL Proof83.4 (41.7% ABV)
This whiskey is in many ways, by definition, unlike any bourbon or rye. Aged in bespoke charred, bourbon soaked barrels. The unfettered spirit is bottled at 41.7% 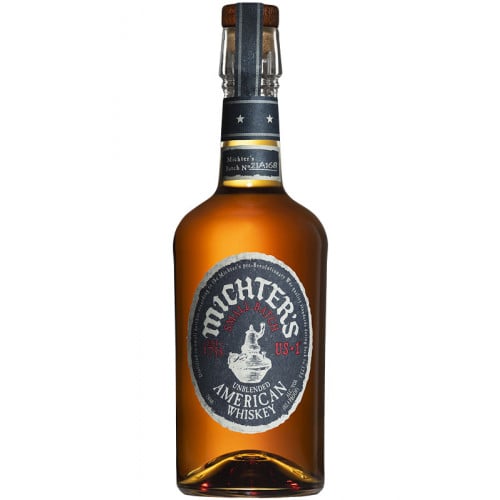 What separates bourbon from regular American whiskey? It’s cooperage. Bourbon must be aged in new charred white American oak barrels, in order to claim the title “Bourbon.” It is not only this distinction that makes Michter's Whiskey Unblended Small Batch American US*1, quite unique. It also falls outside of the jurisdiction of “American whiskey,” which requires all spirit in its category to abide by a firm 80% ABV. Michter's is one of the oldest distilleries in the US, located in Louisville, Kentucky, and their small batch spirit is uninhibited. Aged in “bourbon-soaked” barrels, and bottled at a very exact 83.4 proof, the word "unblended" also implies that this whiskey does not contain neutral grain spirit. Michter's has a new Master Distiller Pamela Heilmann, and no US*1 whiskey is ever released "until Willie and the Michter's tasting panel deems it ready."

The barrels are custom made.

“We are specifying wood that has been thoroughly and properly dried, sometimes for as long as 18-36 months, in order to enhance the natural properties of the wood which allow for better flavor and to reduce the levels of tannin imparted to the whiskey.”

These bespoke barrels are then toasted before charring, which helps make the wood’s sugars more accessible.

“These sugars caramelize and concentrate to form the "red line" in the barrel stave cross-sections due to the heat, ultimately adding more flavor and color to the whiskey as it seeps through the char to the caramel red line.”

Their Rye’s and Bourbons are then entered into their prospective barrels at 103 Proof as opposed to the industry norm of 125. At Michter’s they believe that the lower 103 proof level allows for the concentrated sugars to dissolve more readily into the distillate. This process yields fewer bottles per barrel, but offers greater access to the flavors of the sugars.

At Michter’s they also uses a customized chill filtration technique with all of their whiskeys, as they believe carbon filtration strips flavor and aroma from the spirit.

“we use the different filtration mediums and techniques best suited to each of our individual whiskey offerings – despite it being time consuming and costly – to highlight each expression’s best qualities.”

This whiskey is in many ways, by definition, unlike any bourbon or rye, which abides by several standards. US*1 Unblended American Whiskey is aged in such a way that imparts tremendously unique flavors onto its spirit. After being re-released in 2013, this whiskey has retained all of its distinctions, including its “unblended” character. Bottled at 41.7% ABV this whiskey has deep butterscotch and vanilla notes.

Pick up a bottle of this unfettered whiskey today!

Deep butterscotch and vanilla notes, hints of caramel and dried fruit with a ripened fruit finish.

4.2 out of 5
(5 reviews)
Write a review
Real email address is required to social networks
Sign in
Login with Google
Login with Facebook
Or
We also recommend