Learn more
Size750mL Proof86 (43% ABV) *Please note that the ABV of this bottle may vary
These whiskies represent unique, limited edition expressions from one of the oldest whiskey brands in the United States. 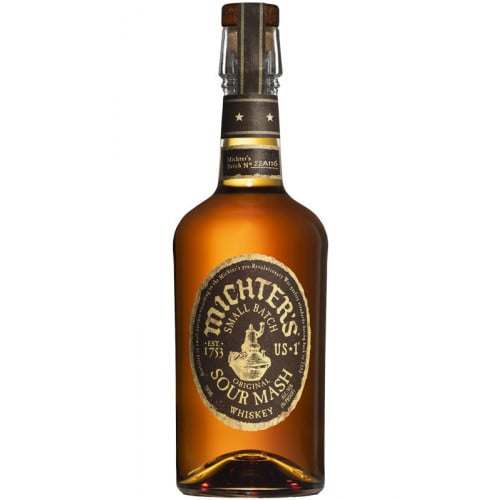 About Michter's US*1 Sour Mash Whiskey

The passage of Prohibition in 1919 forced Michter's, along with nearly every other distillery in the United States, to close. In the early 1990s, however, Joseph J. Magliocco teamed up with Richard Newman in an effort to resurrect the brand. "When we set up our whiskey program for Michter's," says Magliocco, "Dick and I wanted to get back to the "˜cost be damned' roots and produce the finest whiskey possible. Our goal was to show that whiskey made in the United States could be the equal of great whiskey made anywhere in the world."

Michter's US*1 Single Barrel Straight Rye Whiskey is made from a mash comprised primarily of fresh, plump rye grains. Once the grains are harvested, they are sheared so that during fermentation, the grains are saturated with more flavor. After the grains have been fermented, they are distilled through a copper-pot still before being matured in charred, American oak barrels. The barrels are allowed to rest in a heat-cycled warehouse, which forces the wood to expand and contract as the temperature rises and falls. This heat cycling causes the whiskey and wood to mingle with each other, and contributes notes of marmalade and light caramel to the rye. Once Willie Pratt — Michter's Master Distiller — determines that the rye has reached its peak flavor, each single-barrel bottle is filled and sealed by hand.

Michter's Single Barrel Straight Rye Whiskey has an aroma of spices, dark fruits, rye bread and vanilla. The aroma gives way to notes of citrus, baked goods, cinnamon and caramel on the palate, which complement touches of herbs and toast. The finish, which is both sweet and warming, ends with a touch of caramel.

In contrast to Michter's Rye, Michter's US*1 Small Batch Bourbon Whiskey is made from a mash composed primarily of ripe, American corn. Once the grains have been harvested, they are milled and mashed before being fermented and then distilled through a copper-pot still. Following distillation, the bourbon is matured in hand-selected white oak barrels, which contributes a rich, amber color to the whiskey.

The bourbon has an aroma of apricots, nutty dough and cracked pepper, along with notes of sweet corn and vanilla on the palate. The finish is well-balanced, and ends with notes of raisins and plums. Michter's US*1 Small Batch Bourbon Whiskey earned four stars from F. Paul Pacult's Spirit Journal, and earned a score of 90-95 points from Wine Enthusiast.

Michter's Pot Still Sour Mash Whiskey, which was the company's most popular expression before it declared bankruptcy in 1919, is made in accordance with original sour mash tradition. By using sour mash, which refers to the art of using a small amount of spent mash from an older batch of whiskey in order to catalyze fermentation in a new batch of whiskey, Pratt is able to maintain consistency with each bottling. While Magliocco readily admits that he wanted to pay tribute to the original Michter's Sour Mash, which was comprised of a mash of 50% rye, 38% corn and 12% barley, the current release isn't an attempt to reproduce it exactly. Rather, it was inspired by the older version, but with the intention of improving it. "If it was like everything else," says Magliocco, "we wouldn't have released it."

Michter's US*1 Small-Batch Original Sour Mash Whiskey has notes of dried fruits (particularly strawberries and oranges), herbal tea and a hint of roasted nuts. The finish, which lingers, is slightly bitter and has a touch of pine needles, along with notes of roasted coffee and oak.

Michter's Single Barrel Rye, Small Batch Bourbon and Sour Mash Whiskey represent unique, limited edition expressions of whiskey from one of the oldest brands in the United States. Pick up all three today!

Rye: Aroma of spices, dark fruits, rye bread and vanilla. Notes of citrus, baked goods, cinnamon and caramel on the palate, which complement touches of herbs and toast. Finish, which is both sweet and warming, ends with a touch of caramel.