Learn more
Size750mL Proof110.4 (55.2% ABV) - May vary *Please note that the ABV of this bottle may vary
This limited release of Michter's incredibly popular US*1 Single Barrel Rye Whiskey was bottled at barrel proof. 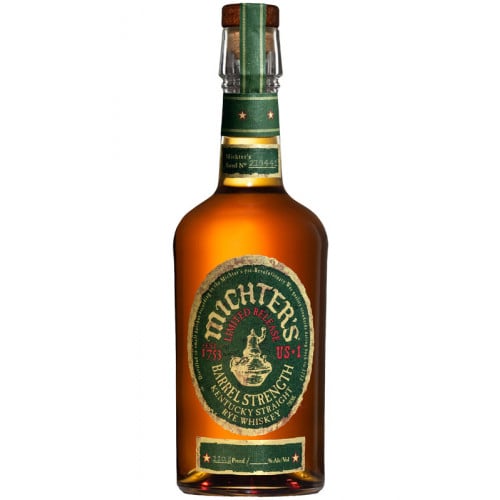 Michter's US*1 Single Barrel Straight Rye Whiskey is made from a mash comprised primarily of fresh, plump rye grains. Once the grains are harvested, they are sheared so that during fermentation, the grains are saturated with more flavor. After the grains have been fermented, they are distilled through a copper-pot still before being matured in charred, American oak barrels. The barrels are allowed to rest in a heat-cycled warehouse, which forces the wood to expand and contract as the temperature rises and falls. This heat cycling causes the whiskey and wood to mingle with each other, and contributes notes of marmalade and light caramel to the rye.

As a result, the whiskey a bold aroma of butterscotch, golden raisins and vanilla, which leads to a palate bursting with morning toast, maple syrup and fresh fruit. The finish is spicy, with noticeable touches of mint, cinnamon and honey which linger on the tongue.

Bold aroma of butterscotch, golden raisins and vanilla, which leads to a palate bursting with morning toast, maple syrup and fresh fruit. The finish is spicy, with noticeable touches of mint, cinnamon and honey which linger on the tongue.