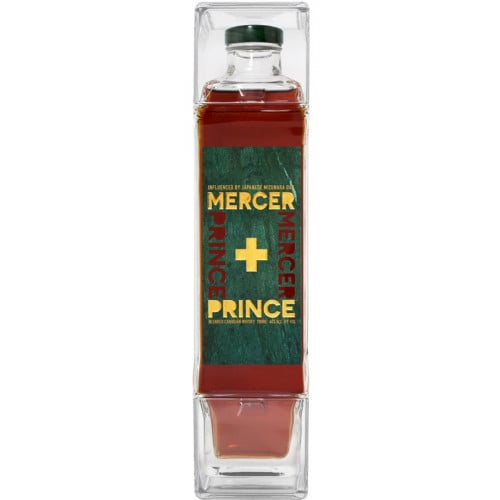 Rakim Athelaston Mayers, also known as A$AP Rocky, is a renowned rapper and record producer with 3 albums, several hit singles, and numerous awards and nominations under his belt. He has been on a spirits discovery journey for a decade, becoming fascinated with the distilling practices of different whiskies. The journey led to his realization that he possesses the knowledge and passion to create a spirit that would honor traditional practices while disrupting the industry at the same time. He partnered with Global Brand Equities and E & J Gallo, bringing to life Mercer + Prince, a blended Canadian whisky.

Released in 2022, the whisky is double-distilled on Coffey stills. It then spends at least 4 years in ex-bourbon American white oak casks, imparting the spirit with sweet aromatics. Japanese Mizunara oak casks add making spice notes as well as a richness and robustness that further differentiate the whisky from similar Canadian counterparts. The blended whisky is bottled at 80 proof and features a complex profile with a fruity nose and caramel, vanilla, baked apple, and cinnamon on the palate. The bottle was designed with both artistic appeal and functionality in mind. It can easily rest on its side and has 2 integrated acrylic cups, meaning you can share a dram with a friend at any time.

Get your bottle of this Canadian whisky today!

It's a complex whisky with a fruity and sweet nose with a touch of brown sugar. Look for vanilla, dark caramel, prominent baked apple, and cinnamon on the palate, culminating in a smooth finish.