Learn more
Size750mL ProofMedley 4YO -102; Old Medley 12YO - 86.8 (43.4% ABV) *Please note that the ABV of this bottle may vary
Made using an old family recipe, one of these bourbons earned the title "Best in Show"at the Denver International Spirits Competition.
Notify me when this product is back in stock. 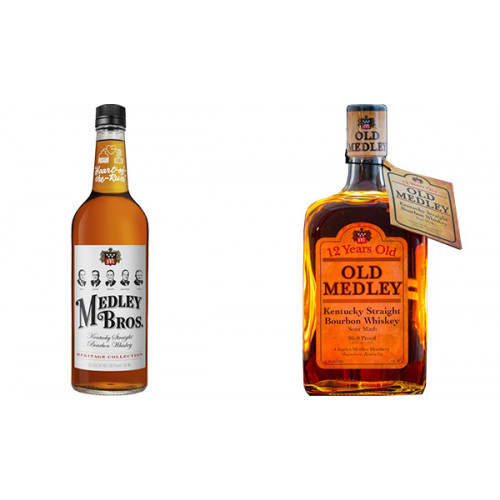 Charles W. Medley, president of his namesake distillery in Owensboro, Kentucky, is a seventh generation distiller. His family's roots run back to the birth of Kentucky bourbon; while Reverend Elijah Craig is usually credited with producing the first bourbon whiskey at his mill in Lebanon in 1789, Medley's ancestors were distilling whiskey at the same time in the adjacent county in Kentucky. In fact, except during the thirteen years during which distillation was outlawed in the United States, a member of the Medley family has been operating a distillery continuously since 1812.

Following the repeal of Prohibition in 1933, with the goal of honoring his family's rich history, Thomas Aquinas Medley began production of a new bourbon. Thomas died shortly thereafter, but the Medley Distilling Company continued to produce Kentucky bourbon for the next five decades. Today, under the tutelage of Charles W. Medley and his son Samuel, the distillery (recently renamed the Charles Medley Distillery) continues to distill bourbon using the same recipes and techniques that previous generations of Medleys have perfected over the course of two centuries.

Medley Kentucky Straight Bourbon Whiskey is made using a mash of 77% corn, 10% rye and 13% malted barley. While federal regulations permit bourbon to be labeled as "straight"if it has aged for two years, Medley Bourbon is matured for four years and bottled at 102 proof (the bottle's label is nearly identical to the label used in the 1950s). As a result of its aging and high-proof, the bourbon has warm notes of caramel, oak and spices, that are followed by touches of creamy vanilla, milk chocolate and caramelized sugar.

Old Medley 12 Year Old Kentucky Straight Bourbon Whiskey is also made using a family recipe of corn, rye and barley. The grains are fermented with an eight-generation old yeast strain (the exact type of yeast used remains a closely guarded family secret) before being twice distilled twice through a copper-pot still and matured in new, charred American oak casks for twelve years. The bourbon has a slightly grainy aroma, with touches of wood spice, rye and aged vanilla. The aroma gives way to notes of sweet pecan, caramel and oak, and leads to a warming, slightly sweet finish.

Medley Bourbon: Warm notes of caramel, oak and spices, that are followed by touches of creamy vanilla, milk chocolate and caramelized sugar.