Size750mL Proof80 (40% ABV)
Built on Buffalo Trace's low-rye mash bill recipe, the Benchmark is a classic straight bourbon through-and-through. It celebrates the pioneers that settled the land the distillery stands on today.
Notify me when this product is back in stock. 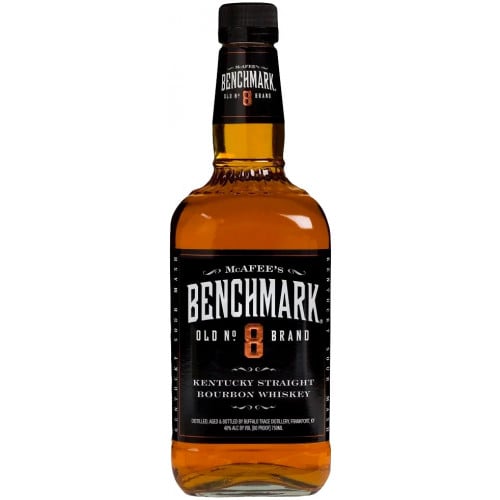 Established in 1775, Buffalo Trace is one of the few American distilleries that continued its operations through Prohibition, after it received a permit to bottle medicinal whiskey when the 18th Amendment came into effect in 1920, and was even permitted to produce new whiskey from 1930 to 1933. As a result, George T. Stagg Distillery, as the company was named at the time, was one of only four Kentucky distilleries that were capable of producing whiskey after Prohibition ended. The distillery changed several hands through more than two centuries, and the owners included Colonel Edmund Haynes Taylor, Jr., who earned himself the title of the father of the modern bourbon industry.

The oldest continually operating distillery in the United States includes the rich legacies of master distillers such as E.H. Taylor, Jr, Albert B. Blanton, Orville Schupp, and Elmer T. Lee as well. To this day it remains family-owned, operating on the same 130 acres of land adjacent to the Kentucky River as it has for over 200 years. Similarly, the distillery’s flagship bourbon has been made using the same process for over 2 centuries.

Now part of the Sazerac family, the distillery has remained dedicated to a single craft: the making of fine bourbon whiskey, bringing together tradition and innovation in the process. In 2000, the Buffalo Trace Distillery became the first American distillery to win Whisky Advocate's prestigious Distillery of the Year award. Its Master Distiller Harlen Wheatley joined the distillery in 1995, and has worked in every aspect of the whiskey production process before becoming the master distiller in 2005. Harlen has been responsible for all the distilling and aging for the Sazerac Company, and has also been tirelessly promoting and teaching about the finest bourbon whiskeys.

McAfee's Benchmark Bourbon pays tribute to the McAfee brothers ― two Kentucky pioneers who settled in the region where the distillery stands today. It employs Buffalo Trace's signature low-rye mash bill with around 10% rye. The Benchmark brand dates back to the late 1960s but has since changed hands and gone through significant changes. With a classic straight bourbon profile, it's a pleasant daily drinker that celebrates the history of the distillery and the surrounding land.

Aromas of caramel, butterscotch, apple, vanilla, and wood lead the charge on the nose and are joined by leather, tobacco, caramel, nuts, dried cherries, grain, and spices on the palate. Finishes smooth with vanilla, oak, spices, and a touch of nuttiness.