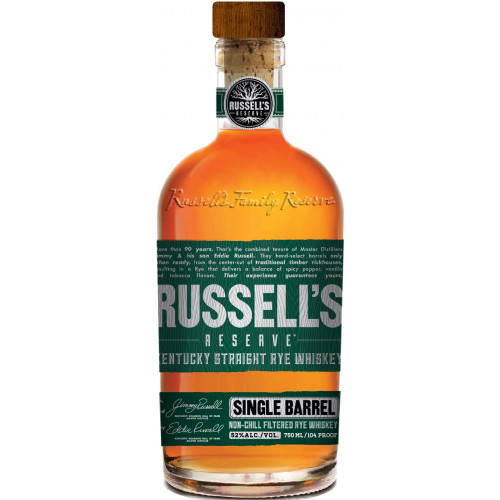 Jimmy Russell has kept many of the details about his new Russell’s Reserve Single Barrel Kentucky Straight Rye Whiskey secret, although the whiskey is rumored to be six years old and have a comparatively low rye content for a straight rye whiskey. That said, Jimmy and Eddie have revealed that the barrels selected for Russell’s Reserve Single Barrel Kentucky Straight Rye Whiskey were selected from the “center cut” of Wild Turkey’s warehouse, because these levels (levels 3-5) are exposed to the least temperature variation and therefore offer the highest consistency of flavor. The whiskey is non-chill filtered and will only be available in limited quantities.

Russell’s Reserve Single Barrel Kentucky Straight Rye Whiskey has a fruity aroma of bananas, vanilla, almonds, mint and apple crisp, which leads to a palate filled with rhubarb, cinnamon spice, worn leather and oak. The finish is velvety and long-lasting, with pronounced notes of chocolate, coconut and thick custard.

Fruity aroma of bananas, vanilla, almonds, mint and apple crisp, which leads to a palate filled with rhubarb, cinnamon spice, worn leather and oak. The finish is velvety and long-lasting, with pronounced notes of chocolate, coconut and thick custard.