Learn more
Size750mL Proof80 (40% ABV) *Please note that the ABV of this bottle may vary
The Glasgow Distillery Company’s Malt Riot is a blended malt scotch made from handpicked single malts from across Scotland on the backbone of the distillery’s signature Glasgow 1770 single malt. Enjoy it with ice and ginger ale, or in a whisky sour.
Notify me when this product is back in stock. 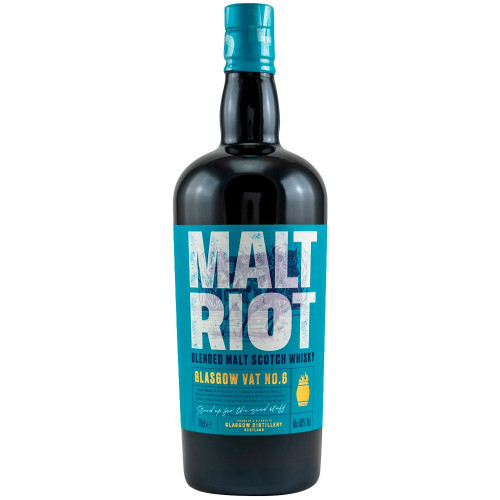 Malt Riot is a blended malt scotch whisky inspired by the malt tax riots of 1725, when the government wanted to impose a tax on Scotland's malted barley. The Scots, foreseeing an increase in the cost of whisky, beer and other daily essentials, rose up. Glasgow saw some of the fiercest protests, with malt stores barricaded and the excise men chased from the city. The protesters even destroyed the home of the local member of parliament, who voted in favor of the tax.

Malt Riot is a blend of handpicked single malts from across Scotland with the distillery’s signature Glasgow 1770 single malt at its heart. This light and smooth whisky is bottled at 40% ABV with no age statement.

The nose opens with freshly planed oak leading to sweet vanilla and hints of floral hyacinth. Toffee apples on the palate open up to dry spices and caramelized pineapple. The light and smooth finish offers ripples of milk chocolate, fruit and nut.