Size1L Proof110.10 (55.05%ABV)
Maker's Mark Cask Strength Kentucky Straight Bourbon Whiskey is aged for approximately six years and bottled at cask strength of 108-114 proof. ABV may vary.
Notify me when this product is back in stock. 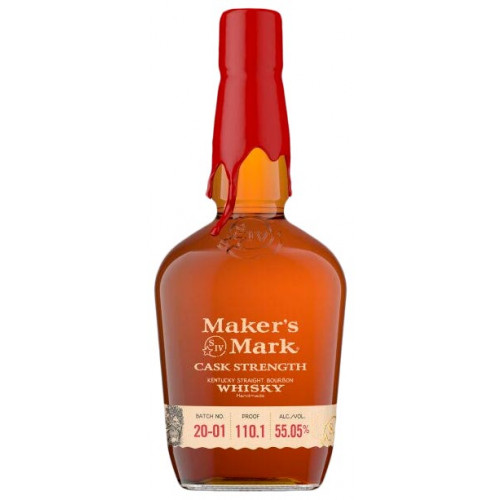 On October 1, 1953, William Samuels Sr. purchased Burks Distillery, which was situated in Loretto, Kentucky, for $35,000. Five years later, the distillery released the first bottles of Maker’s Mark Bourbon Whisky, which featured the distillery’s distinctive red wax seal. The distillery was listed on the National Register of Historic Places in 1974, and was listed as a National Historic Landmark in 1980.

Under the auspices of Robert Samuels (William’s son), Maker’s Mark Distillery announced the release of a cask strength bourbon in 2014. Made from a mash of corn, wheat and malted barley, the bourbon was aged for approximately six years before being bottled at cask strength. Uncut and unfiltered, the bourbon has an aroma of caramel, Indian cooking spices and roasted corn that give way to notes of caramel apples, brown sugar and bananas on the palate. The finish has hints of citrus, orange zest and apple cider.

Aroma of caramel, Indian cooking spices and roasted corn that give way to notes of caramel apples, brown sugar and bananas on the palate. Finish has hints of citrus, orange zest and apple cider.