Learn more
Size750mL Proof119.3 (59.65% ABV) *Please note that the ABV of this bottle may vary
The Proprietor is a 12-year-old single barrel bourbon. Each cask has slightly different characteristics and each was chosen by the founders for its exceptional quality.
Notify me when this product is back in stock. 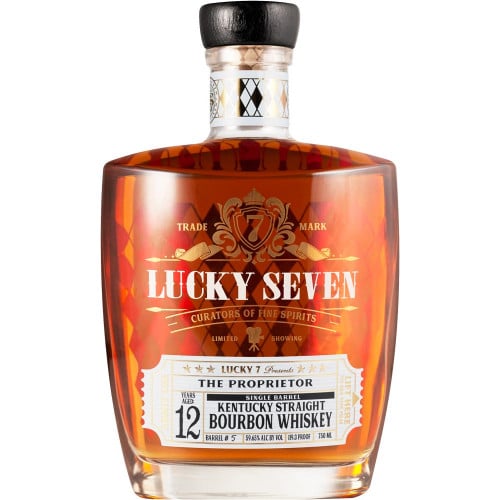 Lucky Seven "The Proprietor" 12 YO Single Barrel Bourbon isn't a blend at all. This series consists of exceptional barrels that Lahalin and Pals deem too great to blend and instead get the single-barrel release treatment. 3 barrels have since been released: The smooth #5 has dried stone fruit notes, the #7 has fruity oak, sweet dried fruit, and vanilla, and barrel #9 has brown sugar, molasses, and cantaloupe.

Expect an exceptionally well-balanced, rich, and smooth profile with prominent dried stone fruit notes. The nose has fruity apricot, apple, and a hint of nuttiness, while the palate has vanilla, honey, toffee, fruit, and oak. Finishes long with a pleasant sweet touch.