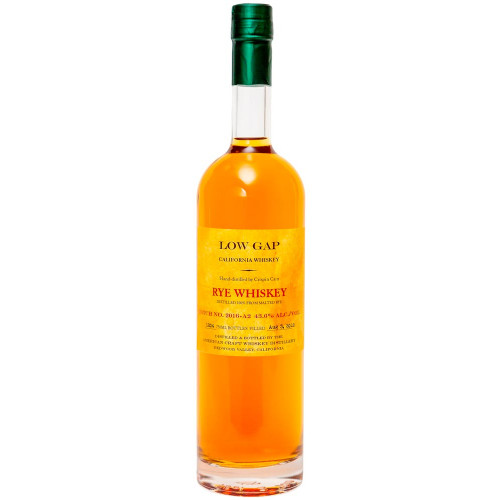 After the whiskey has aged for two years, it is brought to proof using rainwater and bottled by hand. The whiskey has a rich, malty aroma of vanilla, nuts, citrus and toasted oak, along with a velvety palate filled with notes of rye grain, leather, vanilla and chocolate. The finish is full-bodied and smooth with lasting flavors of honey and a pleasant earthiness.

Low Gap earned the title "Artisan Whiskey of the Year" from Whisky Advocate in 2012, and quantities of the brand-new Low Gap Rye Whiskey are extremely limited.

Rich, malty aroma of vanilla, nuts, citrus and toasted oak, along with a velvety palate filled with notes of rye grain, leather, vanilla and chocolate. The finish is full-bodied and smooth with lasting flavors of honey and a pleasant earthiness.