Size750mL Proof84.4 (42.2% ABV)
Crafted by Crispin Cain, this whiskey channels the purity of North California nature. Double distilled using a Charentais pot still that is usually employed in cognac-making, it's an approachable and well-balanced straight bourbon.
Notify me when this product is back in stock. 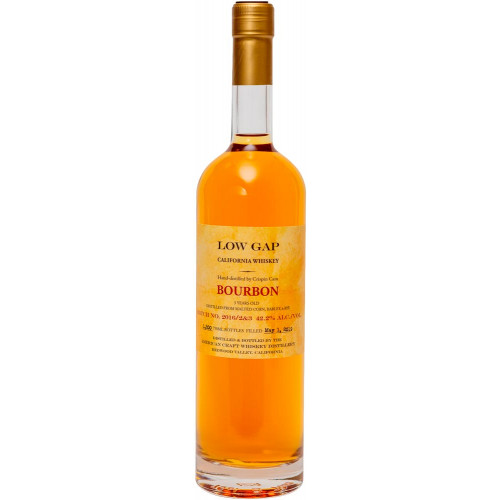 It was while working for Germain-Robin that Cain got the idea of creating high-quality whiskey from Northern California that would express the purity of nature, "one which expresses the simple beauty of clean air, clean water, and tall trees, while capturing the complexity of malted grains from a variety of local and classic sources." He continues: "I create Low Gap whiskies using the time honored traditions of Cognac, keen attention to fermentation, the Charentais Pot Still, the double distillation method, choosing fine barrels to match fine spirits. Carefully selecting the distillate which becomes Low Gap Whiskey is the best part of my job, I do this with great pleasure," says Cain of his Low Gap Whiskey. Crafted from a mash bill of 55% corn, 30% malted barley, and 15% malted rye, then aged in new charred oak for upwards of 3 years, this expression is bottled at 86.5 proof.

The buttery nose opens with malt, butterscotch, vanilla, oak, caramel, toffee, and fudge. There's maple syrup, corn, wood, and spice on the palate, along with some citrus and chocolate. The finish is smooth and soft with malt and toasted grain notes.