Size750mL Proof86 (43% ABV)
Matured in white oak casks, this whisky was named the Canadian Whisky of the Year by Whisky Advocate in January 2013.
Notify me when this product is back in stock. 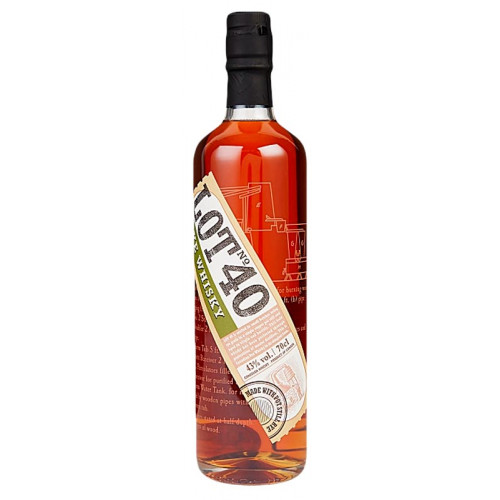 About Lot No. 40 Canadian Whisky

Following the end of the American Revolutionary War, Joshua Booth emigrated from his native New York to the Ernestown Township in eastern Ontario. Booth was a farmer and carpenter by trade, and eventually began distilling whisky on his farm at Lot No. 40 near Millhaven, Ontario. Booth died in 1813, but seven generations later, his great-great-great grandnephew, Michael D. Booth began producing a whisky named Lot. No 40 once more.

Today, Lot No. 40 Canadian Whisky is made from a mash of 90% Canadian rye grains and 10% malted barley. The grains are mashed and fermented, before being distilled through copper-pot stills and matured in premium, white oak casks. The whisky has an aroma of sour rye bread, earthy minerals and nutmeg. The aroma gives way to touches of citrusy fruits, rock candy and honeyed oak on the palate, which are complemented by undertones of woody spices, cloves and ginger. The finish is spicy yet mellow, with notes of rye and velvety oak.

Aroma of sour rye bread, earthy minerals and nutmeg. Touches of citrusy fruits, rock candy and honeyed oak on the palate, which are complemented by undertones of woody spices, cloves and ginger. Finish is spicy yet mellow, with notes of rye and velvety oak.